The spunky spirit of Hazel Laura Wittman Kepple took flight Tuesday, Nov. 1, 2016. Packed within her tiny 94-year-old frame was a huge presence, one that blossomed as a result of having lived during an era of challenge and opportunity.

Born in her beloved Kiester, Hazel shared her early years with sisters Helen, Lois and Ona Lee — women with whom she remained especially close throughout her lifetime. The persevering, can-do spirits and insightful perspectives of this special sisterhood resulted in their becoming known to the family as “Wittman women.” One didn’t mess with them. 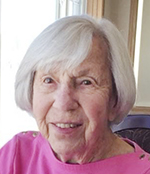 Hazel’s first 12 years were spent on the family farm just east of Kiester. In 1934, the family moved into Kiester when her father acquired Kiester Implement. Graduating four years later at age 16 from Kiester High School as valedictorian, Hazel opted for a move to Minneapolis to earn a bookkeeping/secretarial degree after financial issues of the times nixed her dream of attending college. Even in her later years, being denied that dream often brought tears to her eyes. Eventually, while raising her family, Hazel earned her securities license and later co-founded WIG, the Women’s Investment Group. She had a keen mind for figures and was passionate about being fiscally savvy and responsible. Hazel’s sharp intellect, boundless curiosity, lifelong sense of wonder and focus on learning propelled her throughout her lifetime.

Working in Albert Lea’s employment office after the war, Hazel met a handsome Navy pilot, Paul Kepple, who  had returned to Albert Lea to work in the family implement business. The two married in 1948 and together they had three children, Lloyd, Jane and Anne. The couple introduced their children to the magic of nature. Summers found them fishing and camping in the pristine lakes of the Boundary Waters, and winters they skied the slopes of the Midwest, Colorado and Montana — often with lifetime family friends, Don and Maryann Petran.

Hazel and Paul’s shared adventuresome spirit led them to travel the globe to explore and discover new cultures. Hazel would plan the trip, and Paul was always game, especially if he could fly his plane and bring his guitar. They enjoyed transitioning between small-town Minnesota life and major cultural areas of the world, deeply appreciating what each had to offer.

The couple also loved to dance; their Stardusters dance group often traveled to area ballrooms to kick up their heels as big band orchestras toured the area. Recalling those years, Hazel commented, “Boy, could we dance!”

Hazel was affectionately known for her stuff — her collection of items she found most often at area auctions. What some saw as junk, Hazel saw as having possibility. She crammed the family’s heated garage with pieces she sensed had re-purpose potential — even an entire wooden bowling alley lane.

“Well, maybe I’ll make a table out if it someday,” she said.

She taught herself to refinish furniture and her children fondly remember their mom in her work clothes, along with the refinishing tools, rags and smells. Her home reflected her eclectic taste, and items discovered in her husband’s hardware store, Clarks Grove Cafe, Countrymen Drug and even an old chicken coop tastefully decorated her home.

In addition to her unique decorating style, Hazel was a culinary adventurer. She experimented with spices, ingredients and textures, and she loved hostessing gatherings and dinner parties. She also enjoyed an evening scotch; recently at her 94th birthday gathering when asked if she’d like one, she responded with, “You bet,” and promptly downed it.

Often described as classy, Hazel had impeccable taste in clothes. She sewed for herself and her children, and explained to them that classic styles could be worn for years — just toss in the latest accessory and voila! You were set. Hazel loved her trusty hats and multi-colored kerchiefs — her signature headwear.

Hazel passed on her veneration of the natural world to her children and grandchildren, in large part through her fascination with the world of birds. This love of all things avian served as a source of wonder and entertainment throughout her lifetime and remains an eternal gift to her family.

Beset with macular degeneration during the last 20 years of her life, Hazel adapted remarkably well to her vision loss. One didn’t think of her as being blind; it never became who she was, and she compensated amazingly with her intellect and perseverance. Daughter, Anne, recalls that even when partially blind, Hazel somehow managed to thread the sewing machine at her home and produce pillow and couch covers.

Hazel also was an ardent “do-it-yourselfer.” She simply took charge. Once when traveling to see Anne’s family in Brazil, she brought along a boxed Radio-Flyer wagon and within an hour of her arrival — after a 24-hour trip from Minnesota and nearing 80 years old — she requested tools and began assembling the wagon.

Hazel valued, taught and practiced being thoughtful to others. She was unassuming and instilled in her children and grandchildren an interest in things urban and cosmopolitan. She deftly built a bridge of understanding for them between a small Midwestern town and the larger world, long before the internet.

Now Hazel’s sense of wonder and curiosity live on; a classy Wittman woman.

Hazel is survived by her three children, Lloyd G. Kepple II (Karen) of Mahtomedi and their children Kate and Ben, Jane Kepple Johnson of Albert Lea and her children Scott, Sarah and Paul, and Anne Kepple (Marcelo Borba) of Rio Claro, San Paulo, Brazil, and their children, Tomas and Leo. She is also survived by one dear sister, Ona Lee, of Sioux City, Iowa; and special nieces and nephews.

A memorial service celebrating Hazel’s life and legacy will be announced and take place at a later date.