‘I really believe in the new energy’ 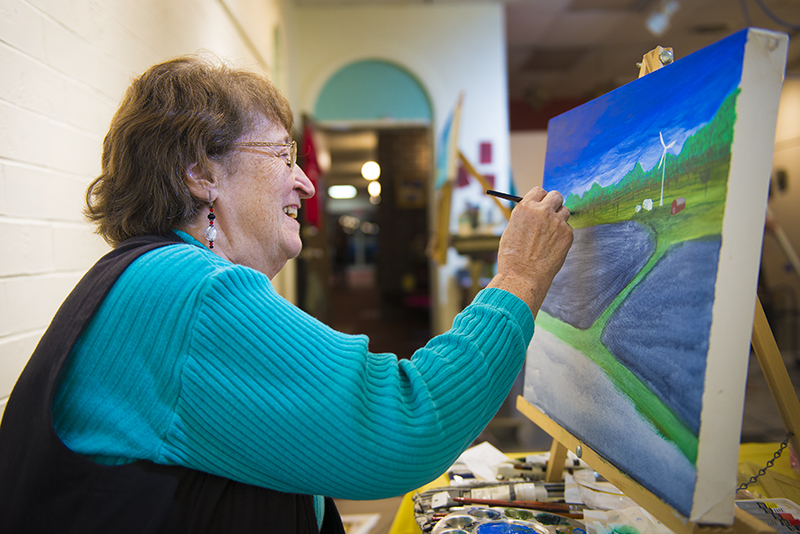 Pop-up show promotes use of wind energy through art

Fifteen artists started working around the clock on Friday on separate art projects as part of a pop-up art show meant to start dialogue about wind energy.

Starting at 10 a.m. Friday and continuing through the end of the day Sunday, the artists set up tables at the Freeborn County Arts Initiative, brought their paint and other supplies and worked at their own pace.

The building was slated to be open 24 hours a day if the artists wanted to work through the night, sleep at the building or eat there. Once the weekend is over, the work will be prepared for showing in a gallery the remainder of the week.

“I really believe in the new energy, and believe we need to do it,” said LaCrosse artist Herta Ludwig, who was painting a scene involving wind on her canvas. “We are in a completely different time now where we can use our technology.”

Laurie Adams, who lives near Geneva, said she was incorporating different photographs she took related to wind energy, and she was making them into a scrapbook.

Theodore Giger, who moved to Albert Lea within the last year, does sculptural art and planned to incorporate the theme into one of his creations.

The event was sponsored by Invenergy, the company that has proposed a 200-megawatt wind farm in southeastern Freeborn County in the Glenville and Myrtle area.

Dan Litchfield, senior manager of business development with Invenergy, said his company is developing the 100-turbine project and then Xcel Energy will take over the build and operate it.

He estimated each turbine will generate enough power for about 700 homes.

Litchfield said he had been a wind farmer for nine years before joining Invenergy earlier this year.

He approached Susanne Crane with the Freeborn County Arts Initiative about the idea.

“I really wanted to have this discussion about the aesthetics of wind,” he said.

Organizers hope to begin permitting in March 2017 with the goal of getting permits approved by the end of 2017. If all goes according to plan, the project would be ready for operation in 2018 or by 2020 at the latest.

Litchfield estimated the project would have a $3.5 million to $4 million annual impact on Freeborn County — whether through property taxes, jobs or other means.

Ten-year-old Erin Boorsma and 11-year-old Kathryn Passingham, who participate in Kids College at the building, said they got to learn a little about wind energy as part of the show, too.

“I think it’s cool a bunch of artists are coming together,” Passingham said.

The public will be able to have a sneak peek at the artists’ work from 1 to 2 p.m. Sunday.

Otherwise, the exhibit with the completed work will be open from 10 a.m. to 4 p.m. Tuesday and Thursday and from 1 to 4 p.m. Friday and Saturday. 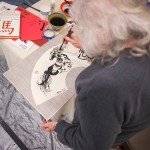 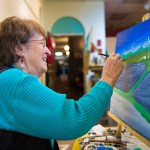 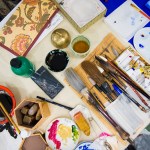 Artists used a number of different paints, brushes and other mediums and materials during a weekend of around-the-clock work in preparation for the pop-up art show. – Colleen Harrison/Albert Lea Tribune 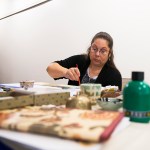