Memorial services for Joann C. Modderman, 87, of Albert Lea will be at 10:30 a.m. Saturday at Bonnerup Funeral Home in Albert Lea. The Rev. Barry Klein will officiate. A time for gathering of friends and family to celebrate Joann’s life will take place one hour before the service, and a luncheon will follow services. 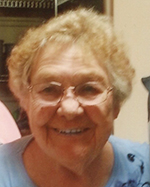 Joann Carol Floyd Modderman was born Feb. 9, 1929, at Naeve Hospital to Perle and Dikka (Hovland) Floyd. She graduated from Albert Lea High School in 1947 and united in marriage to Russell Modderman on Oct. 24, 1948, in Albert Lea. Russell and Joann raised three children, during which time Joann had a variety of jobs interacting with the public. Joann loved to read and play cards/games with family and friends, especially when she was on the winning team and always said, “It’s about getting your name on the paper.”

Her family would like to thank all who helped Joann and LeeAnn on this long journey the past two years.

Although the past month was very difficult for Joann she had constant companionship in Melanie, Marian and LeeAnn Modderman, Caryl Ewing, Lee Alaspa, Judy and Dick Stilley, Sandy Stephens (her daughter from another mother), Irene Tandeski, Cindy Follmuth, Becky Koch, her friends at Senior Court and her great-grandchildren. Their love and encouragement provided Joann joy, comfort and laughter and kept her smiling through it all.