Marcelline Norlene Nowak Babcock, 81, of Mankato, formerly of Wells, died Thursday, Nov. 17, 2016, at Mayo Clinic Health System in Mankato. A funeral service will be at 10:30 a.m. Tuesday at Good Shepherd Lutheran Church with the Rev. Mary Iverson officiating. Visitation will be from 4 to 7 p.m. Monday at Bruss-Heitner Funeral Home in Wells and will continue one hour prior to the service at the church on Tuesday. Interment will be at Rosehill Cemetery in Wells. Bruss-Heitner Funeral Home in Wells is assisting the family. To leave an online condolence, visit www.brussheitner.com. 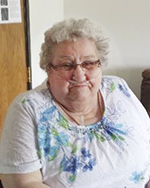 Marcelline was born Nov. 29, 1934, in Wells, the daughter of Herman and Elsie (Wilder) Akemann. She attended Wells High School.

Marcy was united in marriage to Ambrose Nowak on Feb. 26, 1952, in a double wedding ceremony with her sister, Darlene, and Chester Pyzick at St. Casimir Catholic Church in Wells, and to this union eight children were born. The couple later divorced. She married Pete Babcock on Dec. 1, 1985. They were married for 19 years.

Marcy was a woman of great faith, which she passed on to her children. Marcy loved to socialize, enjoyed coffee parties and playing cards. She was an avid Twins and Vikings fan, and was the unofficial general manager of both teams. In her later years, Marcy enjoyed Bible study, watching game shows on TV, and talking to her children and grandchildren on the phone.