Margaret was born March 22, 1927, in Rochester, the daughter of Fredrick and Alma (Grutzmacher) Podolske. She graduated from high school and married Truman E. Nygaard on July 30, 1950, at Trinity Lutheran Church in Rochester. 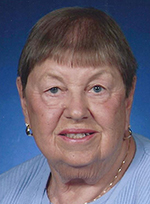 The Nygaards made their home in Austin, where Margaret was a member of St. Olaf Lutheran Church. Truman and Margaret were avid square dancers and members of the G-Sharps and Plus of Rochester and the Austin Promenader’s square dance clubs. Margaret was a very social person and enjoyed spending time with friends; she was a member of a women’s card club and of TOPS. Margaret enjoyed traveling, spending winters in Arizona and time spent at the family lake home at Waterville. She loved her granddaughters and traveled to most of their sporting events and activities while they were growing up. She loved to play games and cards with her great-grandsons, still being competitive enough to want to win. Family gatherings were always a highlight and something she looked forward to.

She was preceded in death by her parents; husband, Truman E. Nygaard; and brothers Dick, Harry and Don Podolske.

Margaret is survived by son and daughter-in-law Thomas and Jody Nygaard of Albert Lea; daughter and son-in-law Mary and Roy Loberg of Fridley; granddaughters Amy and Derek Maas of Woodbury and Alyssa Nygaard of Woodbury; great-grandsons Gavin and Parker; brother and sister-in-law Chuck and Julie Podolske of Rochester; sisters-in-law and brother-in-law Celeste Podolske of Alexandria, LaDonna Nygaard of Austin and Bev and Russ Jacobson of Plum City, Wisconsin; special friend, John Schammel of Austin; and nieces and nephews.

Funeral services will be at 11:30 a.m. Saturday at St. Olaf Lutheran Church. Todd Portinga, associate in ministry will officiate. Interment will be at Grandview Cemetery. Visitation will be from 4 to 7 p.m. today at Clasen-Jordan Mortuary and from 10:30 a.m. until the time of the service Saturday at the church.