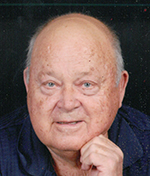 Merv was born Dec 2, 1936, in Austin, the son of Clarence Sr. and Agnes Nasby. He attended school in Albert Lea. For a short time during his childhood he lived in Arizona. On Nov. 17, 1956, he was united in marriage to Jane Converse at First Lutheran Church in Albert Lea. Together they raised two children, Cindy and Daniel. After 44 years of service, Merv retired in 2001 from Carroll Sales in Mason City, Iowa. In his free time, he could often be found painting, tinkering on his rental properties and enjoying his retirement in Arizona. Merv was a selfless man, always holding his family’s needs as his first priority.

He is preceded in death by his wife, Jane; parents Clarence and Agnes; and two great-grandchildren, Aubrey and Braelyn.

Private service arrangements have been made. Interment will be at Oakland Hillcrest Cemetery.