A funeral service will be at 11 a.m. Monday at United Methodist Church, 1000 First Ave. N in Northwood. The Rev. Rob Lanphere will officiate. Burial will be in State Line Cemetery in rural Northwood, with full military honors conducted by members of Our Buddies Veterans of Foreign Wars Post 6779 in Northwood. Visitation will be from 4 to 7 p.m. Sunday at Conner Colonial Chapel, 1008 First Ave. S in Northwood and one hour prior to the service at the church. 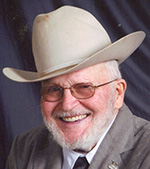 Milo P. “Buck” Pangburn was born March 19, 1932, on the family century farm rural Northwood, the son of Milo Wesley and Marjorie (Gabriel) Pangburn. Buck was baptized and reaffirmed the faith of his baptism through confirmation at the Northwood Baptist Church. He attended rural country school and graduated from Northwood High School in 1950.

He was united in marriage to Beverly Hicks of Gordonsville on Nov. 7, 1954, at United Methodist Church in Northwood. To this marriage a son, Donald Paul, was born Dec. 30, 1955.

He was inducted into the United States Army on Sept. 9, 1953, and was attached to the 11th Armored Cavalry Division. He served his country honorably and faithfully until his honorable discharge on June 9, 1955, at Ft. Knox in Kentucky.

Buck continued his education by graduating from Iowa State University with a degree in animal husbandry. After his graduation from Iowa State, they came back to the family farm and began raising purebred Duroc hogs; showing them at many local fairs and at the Iowa and Minnesota State Fair. He served as a director on the National Duroc Swine Board. He and his father received the 1971 Commercial Producer of the Year award.

Buck took great pleasure in seeing a young 4-H person purchase a calf and then being successful in showing and building their own herd.

Buck loved to visit and had many friends far and wide.

Buck was preceded in death by his parents Milo and Marjorie Pangburn; his niece, Diane Pangburn; and a brother-in-law, Donne Rygmyr.