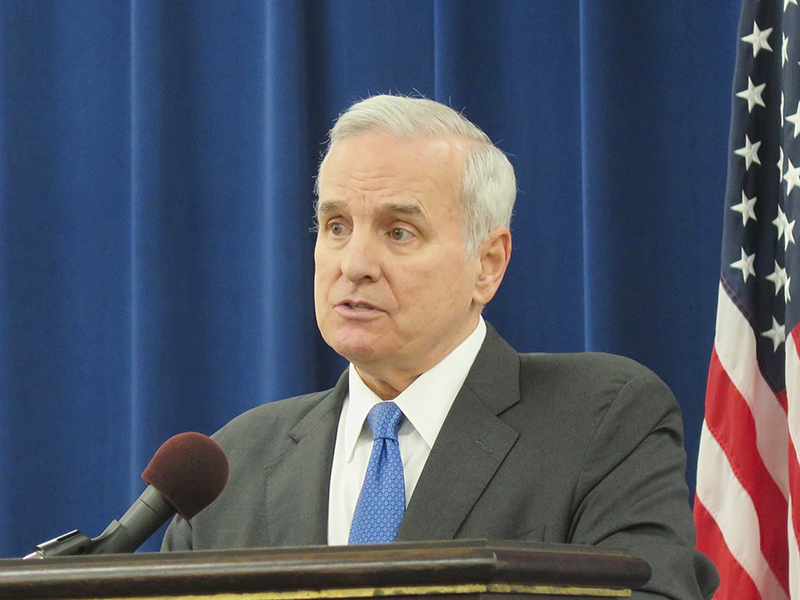 HealthPartners will raise Tom Bloom’s insurance premium by nearly $300 a month starting in January, and shrink his provider network, forcing him to find another doctor.

He’s trying to find a better deal now, but there’s no good place to go.

Bloom, co-owner of a small business in south Minneapolis, does not qualify for government subsidies available to individual buyers through MNsure, the state’s insurance plan marketplace.

“There’s just a group of us who are kind of stuck making too much money, and not rich to pay these kind of premiums,” he said.

Stories like Bloom’s — huge cost hikes and shrinking options for many trying to buy health coverage not tied to their employers — have popped up across the country. But they’ve hit hard in Minnesota, where about 6 percent buy their health care outside their employer.

Dayton has reconvened his task force on health insurance and pushed for a special legislative session to craft a way to ease the financial pain.

But experts say no one has enough data to craft a stable solution, and the problems boil down to an insured population with more serious or chronic health conditions than insurers planned for.

“Those medical expenses are much higher than anybody expected,” said Jim Schowalter, CEO of the Minnesota Council of Health Plans, the industry trade group.

He also said there is evidence people in government health coverage are being steered into the private insurance market because their providers will get paid more that way. “That’s a serious concern that state regulators have been looking at as well as federal regulators.”

It’s been hard to attract healthy people, whose premium dollars help cover the costs of care for sicker people, he added.

Going without insurance is not an option for Bloom and his wife. They wouldn’t dare risk bankruptcy because of a medical problem. If their premiums surge much past the $1,100 a month HealthPartners quoted them, Bloom said he’ll have to dip into his savings to pay for health coverage.

Regina Anctil is in a similar spot. The former business professor retired from her teaching job in December at age 58. But her health insurance situation has her second-guessing that choice.

At 65, Anctil would be eligible for Medicare. Now, she’s on her own for health insurance, which costs $880 a month for a policy that also covers her husband. But she just found out that her insurance carrier is dropping the national network of providers she uses during her frequent trips to the western U.S.

Unwilling to give up long-time doctors, Anctil found a different carrier that still offers a broad provider network. But she will have to pay $1,500 a month for the plan — nearly double her current premium.

“We’re going to eke out one more year of this with our current doctors and I hope that something can be done to make this market more stable,” Anctil said.

The instability is hurting insurers too.

Since 2014, two carriers have pulled out of Minnesota’s individual market after suffering heavy losses. Those that remain have average premium hikes ranging from 50 to 67 percent, depending on the carrier. Most have limited the number of people they’ll cover.

“This is definitely a correction,” said benefits consultant Kim Wagner, president of Preferred Benefit Concepts Inc. “But is it enough and will it be sustainable into the future?”

Minnesota insurers underpriced their products initially to capture a bigger share of the individual market Wagner said. But since the federal Affordable Care Act changes took effect in 2014 they’ve collectively lost hundreds of millions of dollars on individual and family coverage.

“They have to make it up somewhere,” she said. “They can’t sustain it.”

Compounding the problem for insurers is the phase out of some federal financial protections. Despite what insurers say they know about the individual market, University of Minnesota health economist Jean Abraham said there’s not enough data to build something better.

Dayton has proposed a health care cost rebate for people bracing for big insurance spikes and said Thursday he would be willing to request a one-month enrollment extension suggested by Republicans.

The finger pointing on the issue, however, has been intense. Lawmakers have been trading barbs for weeks. Last week, GOP House Speaker Kurt Daudt warned that he’d call for Dayton to resign if the health insurance system’s problems aren’t fixed.

Abraham, though, worries that lawmakers will only treat consumers’ financial pain, not the underlying causes.

“I think that if legislators are smart,” she said, they’ll “think hard about what information do they need to know about individual market functioning, and who these enrollees are, and what they’re consuming, in order to be able to understand what’s the right policy prescription.”