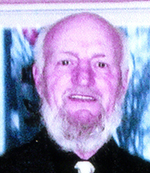 Rich graduated from Albert Lea High School and went on to study at Kansas University and Albert Lea Vocational Technical School. He served our country in the United States Army.

He had worked at Ventura/Holsum foods for more than 23 years.

Rich enjoyed fishing and motorcycle riding. When Rich was in the room there was always entertainment and laughter.

He is survived by wife, Jodi; children Shari Wagner of Hastings, Shane Bolinger and daughter Dyna of Albert Lea and Shawn Bolinger and children Shawnna, Autumn, Collen and Dakota, girlfriend, Amy Casebolt, and children, Gage and Alexia all of Hartland; and stepfather, Dutch Bolinger. He is also survived by the mother of his children, Jean Bolinger, two sisters, including Tammy (John) Johnson and their daughters, Kayla and Megan, his best friend, Jerry Fulfs; and his forever pet companion, Gizmo.

He was preceded in death by his parents and daughter, Rachel.

You will be forever in our thoughts.