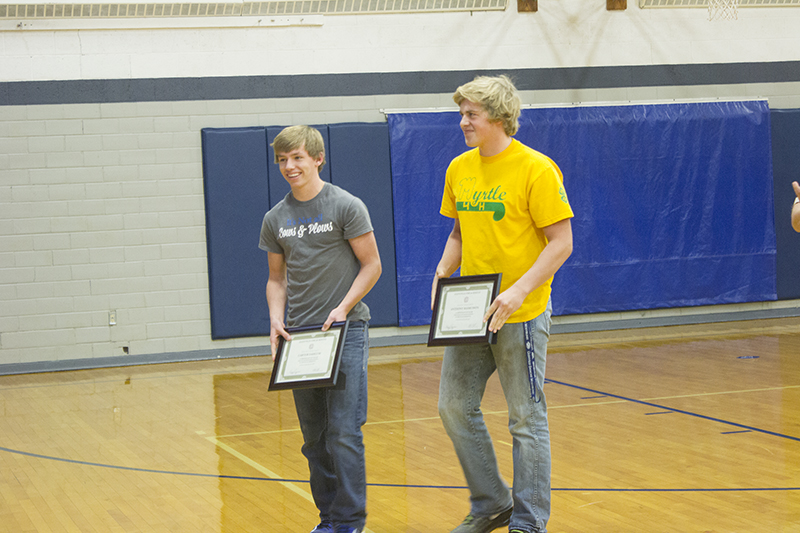 Carter Dahlum and Anthony Rasmusson were honored Wednesday for their efforts in saving a fellow student in August. - Sam Wilmes/Albert Lea Tribune

GLENVILLE  —  Two Glenville-Emmons students were honored Wednesday for helping to save the life of a fellow student in August.

The Glenville Fire Department presented certificates of valor at a school assembly to junior Anthony Rasmusson and senior Carter Dahlum for helping to pull an ATV off of freshman Jadelyn Williamson after a crash in August.

Williamson reportedly lost control of a Polaris Ranger Aug. 17 and rolled, with the ATV temporarily trapping her. The ATV was lifted off of her with the help of Rasmusson and Dahlum prior to the arrival of emergency personnel.

The boys reportedly arrived on scene after the girls’ volleyball coach received a call from one of the girls who rode on the ATV. The boys were told to go there as soon as possible to help.

“It was scary for the most part,” Dahlum said, adding that he felt overwhelmed when he first got to the scene.

“We were like ‘how are we going to get this thing off of her?’” Dahlum said. “You get there, you feel your adrenaline rushing. It shouldn’t be too hard, and we got there, and we were like, ‘Oh my God.’”

Rasmusson said they understood the importance of the situation when they arrived.

“When we got there, we did not know how bad it was going to be,” he said. “ Then when we got out of the car and went over and saw her there … just had to react quick.”

Rasmusson said he appreciated the community’s support for their actions.

“I thought it was just something that we would talk about,” he said.

Williamson said she was thankful Rasmusson and Dahlum were given recognition for their effort.

“I was really happy that they got acknowledged,” she said.

She spent three weeks in the hospital following the crash.

Williamson now wears a tube that goes behind her liver that drains blood. She hopes to have the tube removed later this week.

Williamson was able to return to school halfway through the first quarter. Though she has faced a long recovery, she credits the boys with saving her.