‘There’s very few of us left’ 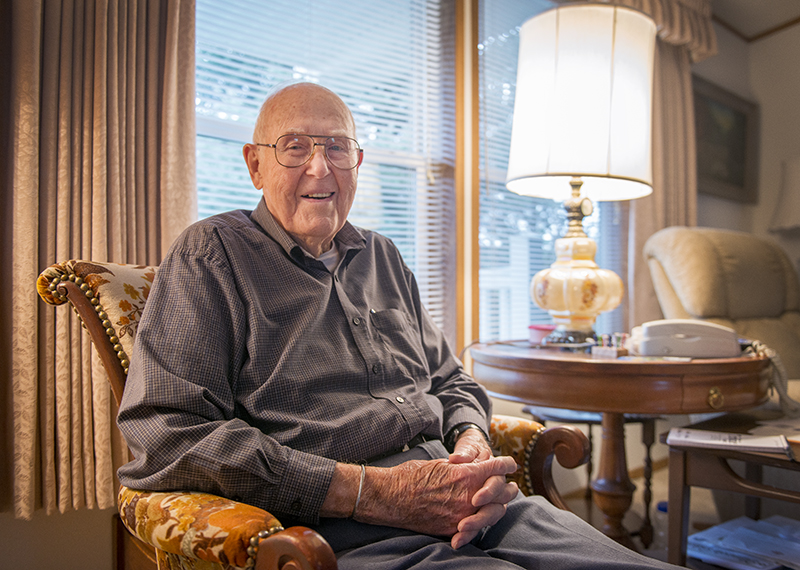 ALDEN — A myriad of memories survives through one local veteran.

Richard Thunstedt — at 95 years old — can recall with great detail just about every moment of his time spent serving in the United States Navy during World War II, along with pretty much every other aspect of his life.

Born and raised in Willmar, Thunstedt moved out to Hollywood, California, during his senior year of high school. Both of his parents had cancer and wanted to move out West to be closer to a medical center known for its cancer research and treatment. His father would pass away shortly after the move.

Following his high school graduation, Thunstedt worked at a bank before receiving his draft notice during war time. Wanting to have a choice in which branch of the military he served, he decided to enlist in the Navy. 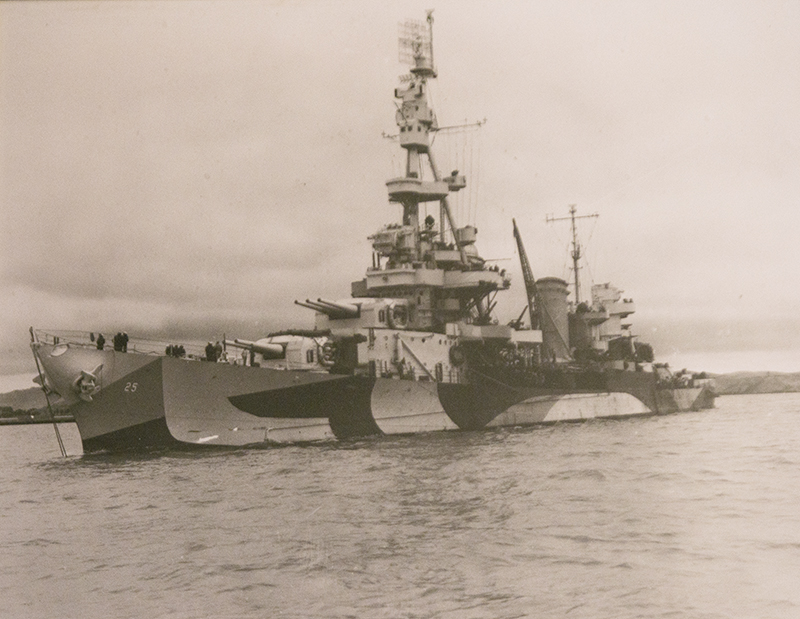 Richard Thunstedt spent over two years on the USS Salt Lake City during his time in the U.S. Navy. – Provided

Thunstedt was 21 years old when he enlisted in August 1942. He went straight to boot camp in San Diego — which was supposed to last eight weeks, but was cut short to five weeks due to a shortage of soldiers, according to Thunstedt.

Following boot camp, Thunstedt was sent to Texas A&M University where he spent three months learning Morse code and other coded communications he’d use in his role as a radioman for the Navy. After finishing his radio training, Thunstedt took a train to Los Angeles and then to San Francisco before departing for Pearl Harbor.

Once in Pearl Harbor, Thunstedt boarded the USS Salt Lake City, a ship that covered 243,000 miles in the Pacific Theater. Including himself, Thunstedt said that 60 percent of those onboard the ship were new recruits. He said the 584 feet wide by 65 feet long ship normally carried about 700 people during peacetime; during World War II there were between 1,100 and 1,200 soldiers onboard. Thunstedt was on what he called a heavy cruiser, which was accompanied by one leg cruiser and four destroyers.

Thunstedt and his shipmates were a part of the Aleutian Islands Campaign — a military campaign conducted by the U.S. in the Alaska Territory’s Aleutian Islands. A small Japanese force occupied the islands of Attu and Kiska. The remoteness of the islands combined with difficult terrain and weather made it take almost a year for the larger U.S. forces to eject the Japanese forces. The islands’ held a strategic value in that they could control Pacific Ocean transportation routes. Thunstedt said his ship’s objective was to keep Japanese supplies from coming in to the islands for the Japanese troops there. Thunstedt worked as a radioman on board, running communications to other ships in the fleet, as well as back to headquarters in Pearl Harbor.

“And they never did,” he said.

He recalled another battle where he and his shipmates were outnumbered two to one. He said the Japanese forces fired on them for an hour and a half without hitting them, during which time the U.S. forces set one of the Japanese heavy cruisers on fire. Japanese forces hit the USS Salt Lake City a total of three times during that battle, with the last shell having hit the ship below the waterline, leaving Thunstedt and his shipmates dead in the water. An admiral on the cruiser had a destroyer lay a smoke screen and had the other three destroyers make torpedo runs. When those destroyers came up on the Japanese forces, Thunstedt said the Japanese retreated as they had only one gun working. 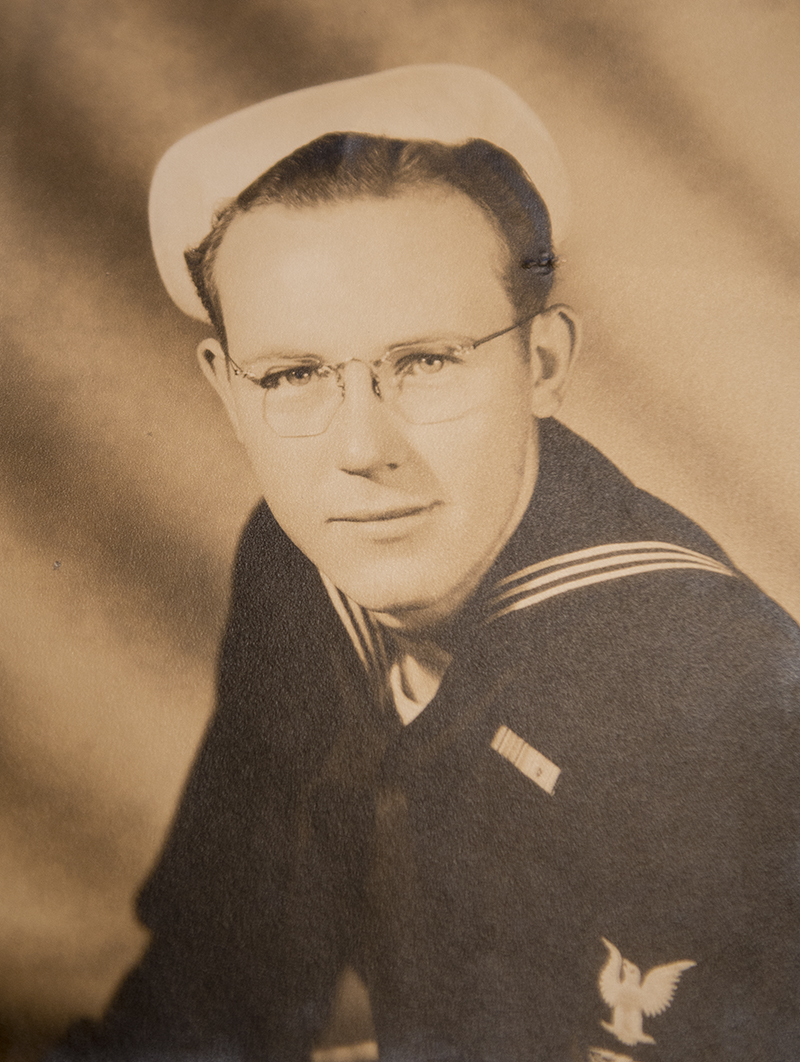 Richard Thunstedt enlisted in the U.S. Navy in 1942 after receiving a draft notice. – Provided

Being on the oldest heavy cruiser in the Navy’s arsenal, Thunstedt said the ship was deemed expendable — meaning it was thrust into the most perilous duties, he said. Some of those duties meant being the first Naval ship to fire on Japanese forces following the December 1941 attack on Pearl Harbor and taking part in 31 different island invasions.

Thunstedt remembers one attack in his ship that sheared off every light bulb in his radio shack, so he and his fellow radiomen copied and conducted code using flashlights.

Another battle — the Battle of Leyte Gulf in 1944 — involved the invasion of the Philippines and was the largest Naval battle of World War II. Thunstedt said it has been considered by some to be the largest Naval battle in history. He said the Japanese fleets were out in numbers, as they knew that if they lost the Philippines they’d lose their main oil supply. It was a three-day battle, during which time Thunstedt personally saw planes coming back full of bullet holes, some of them crashing into the ocean and others crashing as they tried to land on the aircraft carriers.

“We lost a couple of our ships, but we annihilated the Japanese fleet,” he said. “It was a horrible sight to see our aircraft carriers sunk.”

Thunstedt was on the USS Salt Lake City for a total of two years and three months, and was in the Navy a total of 3 1/2 years. He left the Navy after reaching the rank of radioman first class. He said he was offered the position of chief petty officer at the time of his honorable discharge in February 1946, but turned it down as his mother was extremely sick at the time. His mother would live until July of that same year.

He came out of the Navy with many friends he kept in touch with over the years, some of whom he still keeps in contact with today.

Upon his return home to California, Thunstedt would eventually meet his future wife, Pearl, who was out West visiting family. She was originally from Alden, where the married couple would eventually move. Once back in Minnesota, Thunstedt went into business farming with his brothers-in-law Richard and Roger Peterson. The three men would pass the business onto their sons when they retired. Thunstedt spent some time working for his son after the transition, and said his son now farms with his grandson.

Thunstedt’s wife passed away five years ago, following 62 years of marriage and four years of Thunstedt caring for her as her health declined.

Thunstedt is a member of the Alden American Legion and has a long history of being involved with his local community. He said he started Youth for Christ in 1960 in Albert Lea, and served on boards for Naeve Hospital, Alden grain elevator’s co-op board and Alden Area Development Board, among others. He also spoke at Alden-Conger School for its Veterans Day ceremony this year.

Some of what he spoke about at the school almost two weeks ago revolved around what Thunstedt learned from his time in the Navy, he said.

“I realized that working together with people is so important. Our actions and reactions speak volumes to people,” Thunstedt said. “It isn’t about ’me, myself and I,’ it’s about helping people.”

Address: Alden for most of the year, with winters spent in Arizona