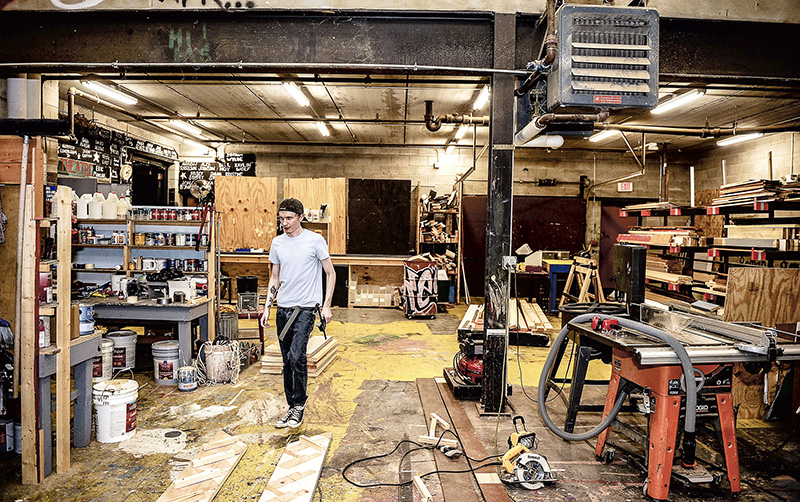 As director Lindsey Duoos Williams leads part of the “Cabaret” cast through a dance routine on the Frank W. Bridges Theatre stage, actress Emily McAlister, playing Sally Bowles, stands in a dressing room across the hall as costumer Madlain Vander takes in a finished outfit: A maroon-wine shawl covering a light-colored slip with thigh-high stockings, a garter, a black 1920s choker necklace and above nude-colored heels. Vander drapes her finishing touch, a light-colored boa, around McAlister’s arm and the other shoulder before the two walk across the hall to the theater to run it by Williams. Taking her eyes off the cast and half-finished set, the director looks at McAlister’s outfit and gives her quick approval.

It’s Sept. 8 and the cast and crew have just under four weeks to piece together their staging of the show before its Oct 5-9 run.

The Riverland Community College Theatre Department stages four shows each year, and each requires the collective work of a team led by a director over several weeks — if not months — of work and planning before an audience hits the seats.

As “Cabaret” director, Williams’ job is to set and lead the vision.

“I’m not a puppet master,” she said. “I’m not a dictator. I’m there to provide an overall artistic vision for the show and make sure that everybody is working toward the same vision — the actors, the costumer, the designer, the crew — and I’m there to help get the best out of all of those people.”

To show the work required to stage a Riverland show, Austin Living went behind the scenes to chronicle just a slice of the journey: 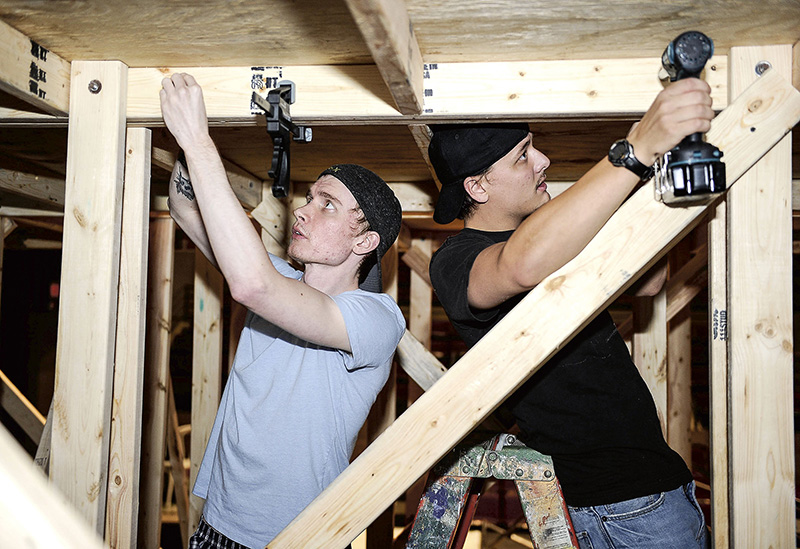 Bring the pieces together

Classic rock plays on the Frank W. Bridges stage that is growing up and out into the audience as Designer and Technical Director Mark Spitzer and a few students walk between the boards holding elevated platforms well above the stage and work to reinforce them for safety. The raised platforms will hold the orchestra during “Cabaret” and feature a walkway for actors and two staircases would spiral on either side of the platform.

In the middle of the stage, the one spiral staircase rests on its side. In a deadpan, Spitzer jokes about leaving it on stage: “I was going to leave them here for the next month or two, but I guess —”

“Perfect,” Williams interrupts with a laugh. “That won’t get in the way at all when we choreograph our big dance number tonight.”

For Riverland theater, multiple elements come together at the same time. On this afternoon, Spitzer and his crew are building the set, a process that will take up to six weeks, before the cast comes in to rehearse choreography a few hours later. During that night’s rehearsal, Vander pulls actors back into the dressing room for costuming.

A musical like “Cabaret” requires even more work because it features singing, dancing and a live orchestra.

With the work of people like Spitzer and Vander to the dedication of the actors to the attentiveness and attention to detail of a stage manager, Williams said the average audience member doesn’t know how much work it takes to bring a play to life.

Each January and February, Williams and her crew set the season for the upcoming school year, focusing on shows they’ll be able to cast with the actors they expect to have, stage with their technical capabilities and afford on a limited budget. And perhaps the biggest factor: Are these shows that will appeal to an Austin audience?

“There’s all these different things that we take into consideration,” Williams said.

Then Williams and Spitzer complete a set design for the fall show before summer so Williams can think about staging, choreography and other notes over break.

With each, she discusses details and ideas to match the collective vision.

Auditions come about seven weeks before the show opens.

“You never really know who’s going to show up,” Williams said, noting sometimes she’ll have a person in mind who doesn’t come out and in others, a new person will show up and surprise her.

Williams staged “Cabaret” with an ensemble because she had students who didn’t have a named role that she wanted to have involved, but she also wanted it to help provide the atmospheric feeling. They’ll be patrons of the Kit Kat Club, audience members, partygoers and more.

“I think of casting like putting a puzzle together,” Williams said. “You’re trying to find the best pieces, but they have to be the best pieces that also fit with the other pieces around them. It’s a really hard thing to do. It’s fun but it’s very challenging.”

She also needs to balance strengths, as she’ll often find an actor or actress who may be a great singer but not as strong as an actor, or she’ll have a great actor who isn’t as strong a dancer.

“You have to try to balance what’s most important to that role,” she said. “Do you need the really great singer and you can work with them and coach them on their acting or do you take the person who’s a really great actor but maybe will need some more coaching and work on their singing. You have to weigh all of those things.”

As “Cabaret’s” costumer, Vander’s goal is to tell a story, but she has a limited budget to find the costumes to provide the backdrop for the characters’ lives and the world right before World War II.

“It’s in the air but it hasn’t happened yet, but you see the elements,” Vander said. “The show shows the buildup, the change in the culture to the war starting, and you can see it in the costumes. A good costumer will show that.”

She rummages through the Riverland, Matchbox and Summerset costume cooperative to look for unique pieces but she looks beyond too. Williams wants vintage and lace in the attire. To Vander, there’s never enough stock to find costumes and it can be even more challenging when they have to construct costumes.