A Wells man is facing prison time after he allegedly waved a machete at people last month. 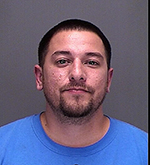 Court documents state a Wells police officer was dispatched Oct. 22 to a residence in Wells on a report of a man waving a machete and hacking at a nearby pole.

An officer met with three people at the address who were described as appearing scared and upset. The group reported that they had been outside, and that the man did not speak to them but withdrew and waved at them a machete-type knife approximately 2 feet in length.

Court documents state the man began hacking into a power pole he was standing next to before walking away.

The officer reportedly found Crowe with what appeared to be a machete in his hand while he was driving down an alley.

Court documents state Crowe entered a detached garage after the officer told him that he wanted to talk to him. The officer reportedly approached the garage, and he heard two voices speaking inside the garage and observed a silhouette of a man swinging a knife at the ceiling through a garage door.

Court documents state that after the officer backed up to his squad car, the garage door opened, and Crowe and Jose Ruiz walked out of the building.

Crowe reportedly told the officer “I am going to take you” and took a few steps at the officer, before the officer deployed his Taser.

The Faribault County Sheriff’s Office assisted in arresting Crowe. Ruiz was arrested for disorderly conduct, and the machete was found and seized.

Crowe’s next court appearance is scheduled for Nov. 14. Second-degree assault carries a maximum sentence of seven years in prison and a $14,000 fine.