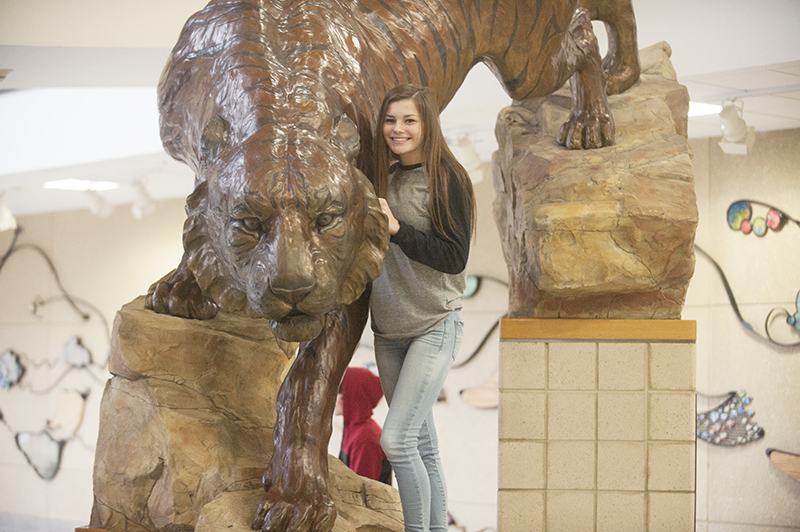 Rachel Rehnelt is a junior and a two-sport athlete at Albert Lea High School. She plays on the soccer and basketball teams and enjoys competing in both sports. Soccer is her favorite sport. - Jarrod Peterson/Albert Lea Tribune

Rachel Rehnelt doesn’t appear to be an intense competitor when you first meet her. But it only takes a couple of minutes of watching her play to see that’s far from the truth.

Rehnelt is a two-sport athlete — soccer and basketball — at Albert Lea High School, and she excels at both.

She fell in love with the sports at a young age.

“I started playing basketball in third grade,” Rehnelt said. “My dad, Kelvin, was the traveling coach when I was younger. He was big into sports.”

Rehnelt’s dad played a lot of sports when he was in high school. Rehnelt’s sister, Sydney, who is four years older than her, played volleyball, basketball and ran track and field for Albert Lea.

Rehnelt said it made for some pretty competitive days growing up.

“We would always compete against each other,” Rehnelt said. “It was more of me learning from my sister than anything. She taught me a lot growing up.”

She said her sister is a big reason for her success the past calendar year when she led the girls’ basketball team in scoring and was named Big Nine All-Conference honorable mention in March.

Rehnelt started playing soccer by the age of 11, and was a full-time starter on the varsity team by the time she was in ninth grade.

Her third season, this past season, was her finest yet. She led the Tigers in goals scored, scored numerous hat tricks and earned a spot on the Big Nine All-Conference team, in addition to being named a Scholar Athlete. She helped the Tigers have a resurgent season after a rebuilding year in 2015.

“This past year in soccer was a lot of fun,” Rehnelt said. “We experienced a lot of success. After making it to the state tournament in 2014, we went through a rebuilding phase last season. But we rebounded this year.”

Rehnelt attributes her personal success this past season in soccer to being more aggressive and taking advantage of more opportunities that maybe she didn’t get when she was one of the younger players on the team.

“I definitely think I was a lot more aggressive this past season,” Rehnelt said. “I was looking to score more goals and help others get scoring opportunities, too.”

Rehnelt is hoping her aggressiveness will help turn around the girls’ basketball program.

“We are a really young team this year, but I am looking to help lead the girls,” Rehnelt said.

When she isn’t on the field or court, Rehnelt loves to hang out with her friends or catch up on sleep. In the summer time, she enjoys going on vacation with her family, which usually consists of camping in the woods.

“Our family likes to get away when we go on vacation,” Rehnelt said. “We have gone on a few camping trips. We went to the Black Hills before, and that was a lot of fun.”

In school, Rehnelt’s favorite subject is math, but she is also interested in the sciences and is thinking ahead.

Rehnelt said she would like to study to become a physical therapist or a radiographer in college, as well as play soccer.

But as a junior, Rehnelt still has some time left to leave her mark on Albert Lea athletics.

“I’m just trying to lead by example and get better every day,” she said.

Interesting fact: She loves to play board games