A feeling of family 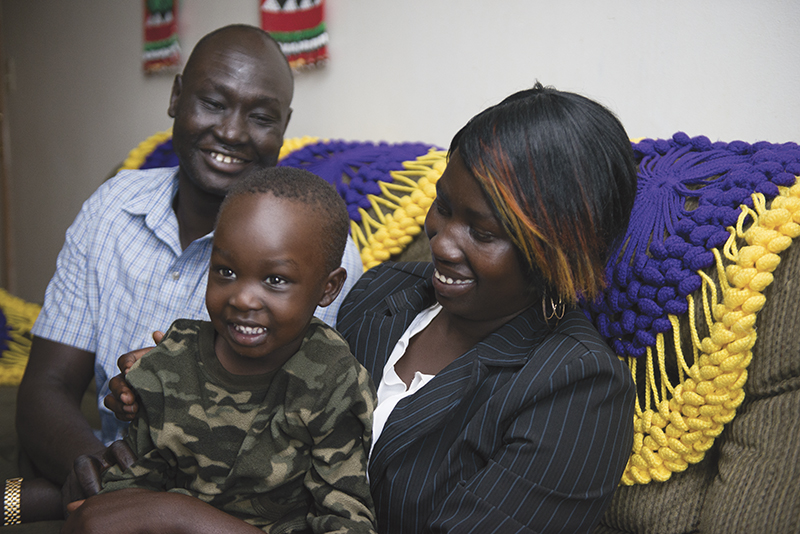 Ten years ago, Nyamuoch Puk was living in an Ethiopian refugee camp with not enough food or water, surrounded by danger.

Today, she’s a married mother of three living, working and going to school in Albert Lea.

While she has come a long way from the refugee camp, Puk — known to her family and friends as Nya — has never forgotten where she came from.

Now, 26, Puk was born in southern Sudan — which in 2011 became the country of South Sudan. Due to a civil war within her home country, some of Puk’s family fled to the country’s border, waiting to be rescued by the United Nations. Her father stayed in Sudan, where he still lives today with other family members.

Being a child at the time of her family’s exodus, Puk doesn’t remember much of her birthplace. She grew up calling the Ethiopian refugee camp home.

While Puk said the camp was lacking in many ways, she was glad for the fact that she was with her mother and her brothers, and they were safer in the camp than they would’ve been in their home country. It was also in that camp where Puk would meet her future husband.

Puk’s husband, Dabang Gach, fled Sudan when he was 15, taking refuge in the same camp. Gach would come to the United States as a refugee in 1999. Puk followed in 2007 — once Gach was able to sponsor her.

“I love everything about Albert Lea,” Puk said. “There’s a lot of opportunity here.”

She said she values the feeling of safety she and her family have in Albert Lea, and the fact that her children can go to school safely and get a quality education while she can work and go to school, as well.

Schooling in the Ethiopian camp was very limited, Puk said, so she enrolled in schooling as soon as she could once in the U.S., and continues to pursue more education. She has taken English classes and other classes in pursuit of her GED at Brookside Education Center.

Puk said she and her family have felt welcome in the community and have been welcomed into the local refugee community, as well. An estimate of about 350 refugees live in Albert Lea, and Puk said her family has become friends with many fellow South Sudanese refugees, getting together with them often. Many attend Zion Lutheran Church together.

“There’s a feeling of family here,” she said.

Puk counted on that feeling of family more than ever earlier this year.

In April, a cross-border cattle raid carried out by attackers from South Sudan in western Ethiopia killed over 200 people and resulted in the kidnapping of over 100 children. Puk’s mother and grandmother were among the fatalities. Puk said she had been working toward bringing them to the U.S. at the time. Immediately, the local refugee community surrounded Puk and her family in support, helping take care of her children and cook and do other things needed while she grieved for her mother and grandmother, and worried about her remaining family in the area of Gambella, Ethiopia.

Puk’s two younger brothers were the ones to break the news to her about their mother and grandmother, and she is now working toward bringing her brothers to the U.S. She sends them money to support them in the meantime, as the process to bring them over is long and arduous, she said. There are many medical and legal procedures they must go through to prove that they are siblings, and Puk must be able to sponsor them financially to bring them to the U.S., she said. Puk currently works in the kitchen at Thorne Crest Senior Living Community and cleans at Alerus to support her family, while her husband works at Viracon in Owatonna.

While at times Puk has considered going back to visit her family, she believes it’s too dangerous, as the area is still too tumultuous. She said the government is too unstable, and that human rights are violated daily. She said the country needs new leadership that will bring peace to her homeland. She believes the country can come back if that happens.

While her young children have only ever known life in the U.S., Puk said they know where their parents are from, and she and her husband will continue to teach them about their heritage. They may not know their parents’ language all that well, but Puk said they need to know what they have here in the U.S., and how so many others don’t have access to the same security and opportunity they have here.

“They have to know where they came from,” she said.

Dreaming of a white Christmas? Outlook is positive