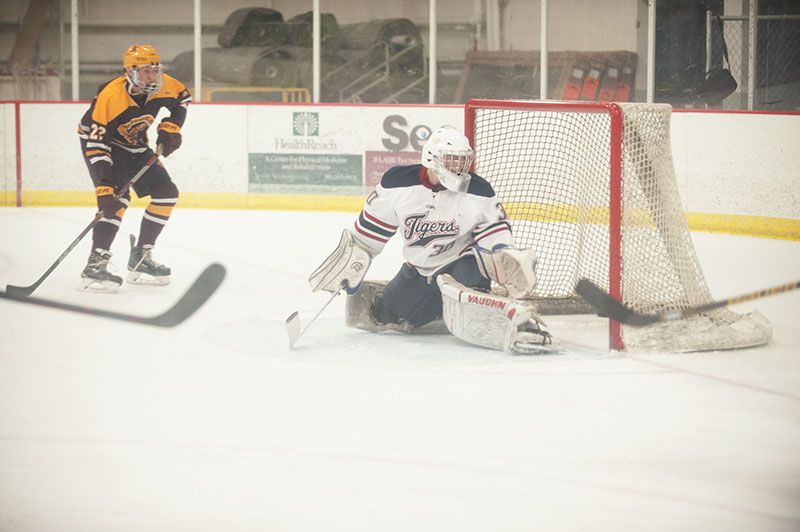 The Albert Lea boys’ hockey team spent most of Thursday night playing catch up in its matchup with Northfield in a Big Nine Conference game that turned into a slugfest.

A power-play goal late in the third period by Albert Lea’s Bergan Lundak tied the game at 3-3 with 5:45 left.

But then the Tigers were called for a five-minute major penalty, and the Raiders took advantage, with Grant Sawyer scoring the game-winning goal, 4-3.

The Raiders struck first in the first period when Phillip Winter beat Albert Lea goaltender Ben Witham on a rebound effort with 8:45 left to in the period.

It was some time before the Tigers would respond. They had a big opportunity with the Raiders being called for a five-minute major penalty, but were unable. More than six minutes into the second period, the Tigers finally evened the score when Austin Dulitz scored off a deflection.

The score didn’t stay even for long, though. Five minutes later, the Raiders’ Jacob Halvorson scored on a power-play goal.

The game remained 2-1 until midway through the third period when Sawyer spotted Halvorson on the other side of the goal and slid him a pas. Sawyer finished off with a quick wrister. The goal was the second of the game for Halvorson and it gave the Raiders a 3-1 lead with 8:08 remaining in the contest.

But Albert Lea wasn’t going to go quietly. The Tigers went on the power play, and immediately made the Raiders pay. Michael Savelkoul scored three seconds into the power play to pull the Tigers to within a goal. Moments later, the Tigers went on another power-play. This time, the Tigers didn’t score as quickly, but with 45 seconds remaining in the man-advantage, Lundak put home a rebound to tie the game with 5:45 left.

But as soon as the momentum came, it went away. Albert Lea senior forward was called for a five-minute major penalty for kneeing with just over four minutes to play. That gave the Raiders a man-up for the rest of regulation and would carry over to overtime, but Sawyer made sure that didn’t happen when he scored with under three minutes to play.

Albert Lea will take a few days off before returning to the ice Thursday in Winona.