At University of Minnesota, questions remain on sexual assault and campus culture 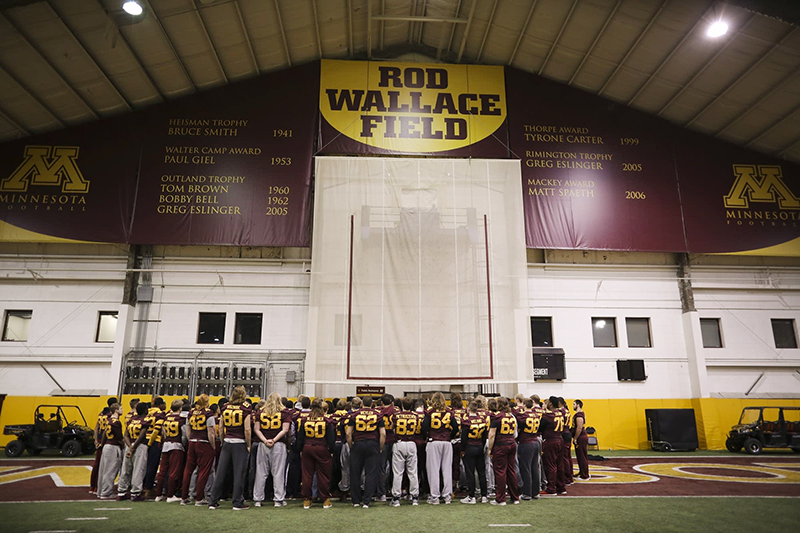 University of Minnesota players speak to reporters in the Nagurski Football Complex in Minneapolis on Thursday night. - Jeff Wheeler/Star Tribune via AP file

After Gopher football players announced and later rescinded a boycott over the suspension of 10 players following a sexual assault investigation, the campus reaction was varied.

Others posted worrying the players involved would be denied due process.

As the football team readies for the Holiday Bowl and students buckle down for finals, questions remain at the University of Minnesota about sexual assault and campus culture.

Junior Audrey Jerome said she feels like there’s a particular problem with athlete culture on campus.

“A lot of athletes feel they can kind of do whatever they want and they’re not always wrong,” she said. “(It’s) frustrating to see the university support them in certain ways.”

The allegations against the suspended players surfaced when KSTP published the 80-page university investigation into the events of the night in question. It said multiple men including some football players engaged in sex with a woman, some of which was not consensual.

While the report’s details may have been a surprise for some, they were no shock for U student body president Abeer Syedah.

“I think the details and the brutality certainly caught many people off guard,” Syedah said, “but I do think that in the grand scheme of those of us that have worked hard to end the rape culture on college campuses this isn’t necessarily very surprising.”

Junior Garrett Schwartz, however, said he was surprised by the details.

The report describes multiple perpetrators participating in the sexual assault of a woman. Schwartz said he doesn’t think such extreme events are common at the university.

But, he added, “the fact that someone wanted to go home with a girl and — for lack of a better term — get ‘action’, that’s not surprising to me.”

Schwartz is a member of a fraternity and said he’s seen attitudes from other men that disturb him, though he said that’s not “a majority” of people.

The university has taken some steps to prevent sexual assault on campus.

Last year, the university rolled out an “affirmative consent” policy mandating “informed, freely and affirmatively communicated willingness to participate in sexual activity that is expressed by clear and unambiguous words or actions.”

Schwartz said he feels the university has done a good job educating students about consent, but he’s not sure it sticks.

“I don’t know if the students really buy into it as much as [the university] thinks,” Schwartz said.

Ex-Minneapolis officer who killed 911 caller to be released

Woman arrested for drug possession and other reports

Woman pleads not guilty to manslaughter, additional felonies in death of baby