AUSTIN — A Nicol’s Fast Lube employee who stole more than $3,600 in Minnesota State Lottery tickets was caught on video redeeming 85 winning tickets at another gas station. 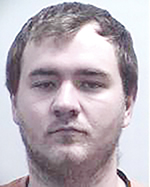 Jonathon Duwayne Preuss, 24, of Austin pleaded guilty to Monday in Mower County District Court to a count of felony theft.

According to a court complaint, Preuss was seen on Nov. 30 surveillance video taking the lottery ticket boxes out of view at Nicol’s and then returning the boxes.

It was found that 359 Minnesota State Lottery tickets valued at $1,037 had been taken.

The purchases were captured on video and officers recovered the winning tickets from Ankeny’s, which matched those taken from Nicol’s, and the losing tickets from the garbage.

Officers arrested Preuss at Nicol’s, and the Minnesota State lottery found more incidents of stolen lottery tickets valued at $3,672 leading up to Nov. 30.