Funeral services for Donald O. Johnson, 96, of Albert Lea will be at 11 a.m. Tuesday at Three Links Care Center in Northfield. The Rev. Clark Cary will officiate. Burial will be in Hartland Cemetery at a later date. 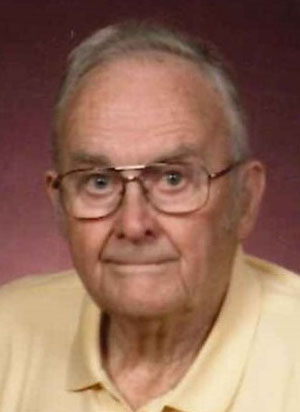 Donald Oscar Johnson was born Feb. 19, 1920, in Albert Lea, the son of Oscar and Mabel (Swenning) Johnson. He was baptized and confirmed at North Freeborn Lutheran Church and attended school in District 5, rural Clarks Grove. A World War II veteran, Donald served in the U.S. Army from November 1941 until October 1945. During that time he participated with the 30th Division in five major battles in Europe. In 1995, Donald wrote an account of his wartime experience.

After 20 years of farming near Hartland, Donald worked road construction and snow removal. In later  years he worked as a custodian at First Lutheran Church in Albert Lea. He was active in his church, a member of the American Legion for 71 years, a volunteer with the American Red Cross blood drives, a devoted husband and father and a tireless caregiver for his wife. For the past six years Donald lived in Bancroft Creek Estates and Hidden Creek Assisted Living. His final weeks were spent near his wife and children at Three Links Care Center in Northfield.

He was preceded in death by his parents Oscar and Mabel Johnson; sisters- and brothers-in-law, Charlotte and Alton Rice and Helen and Marshall Bendixen; sister-in-law, Elaine and Walter Johnson; and brother-in-law, Gary Kopperud.