Memorial services for Edward William Shannon of Albert Lea will be at 10 a.m. Friday at St. Theodore Catholic Church in Albert Lea. The Rev. Russell Scepaniak will officiate. Friends may greet the family one hour prior to the service at the church.

Interment will be in St. Theodore Catholic Cemetery. Military honors will be accorded by Albert Lea area veterans groups. 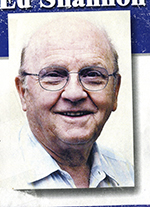 Ed was born July 3, 1927, in Baker, Oregon, the son of Charles and Ruth (Emerson) Shannon. He was very proud of the fact that his grandparents traveled one of the last wagon trains across the Oregon trail. He graduated from Baker High School in Oregon and Mankato State College in Mankato. Ed served his country in the Korean conflict in the U.S. Army and served in the Army Reserves at Fort McCoy, Wisconsin. On April 7, 1951, he was united in marriage to Elaine Verdick in Jackson. Ed taught school in Jordan and Madelia, and worked for Land O’Lakes and Olsen Manufacturing before taking a job at the Albert Lea Tribune — where he worked for over 27 years.

Ed was a member of the American Legion, Veterans of Foreign Wars and Disabled American Veterans. He had a great love for history and spent many hours researching at the Freeborn County Historical Museum. Ed loved living in Albert Lea and lived in the same house all these years.

He was preceded in death by his parents; wife, Elaine, in 2013; and brother, Lewis (Alene) Shannon.