Fern Murray (Johnson) Nelson, 88, of Woodbury, formerly of Joice, Iowa, passed away peacefully Monday, Dec. 19, 2016, under hospice care at Prelude Homes and Services in Woodbury from complications of Alzheimer’s.

A funeral service will be at 10:30 a.m. Tuesday at Sion Lutheran Church in rural Lake Mills with the Rev. Lynn Groe officiating. Pallbearers will be her grandson, grandson-in-law and four nephews. Burial will be at 2 p.m. Tuesday at Bristol Church Cemetery in rural Joice.

Visitation for Fern will be from 4 to 7 p.m. Monday at Mittelstadt Funeral Home, 902 E. Main St. in Lake Mills and will continue one hour prior to the service at the church on Tuesday. 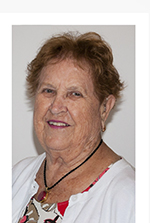 Fern loved flowers. Any floral memorials can be sent to Mittelstadt Funeral Home in Lake Mills. Monetary memorials can be directed to the Fern Nelson Memorial Fund, which will then be given by the family in Fern’s name to her favorite charities. Blessed be her memory.

Fern Murray Johnson was born on a farm in Hartland Township in Worth County, Northwood on Nov. 16, 1928, to Thomas A. and Mabel (Sime) Johnson. The youngest of four living children, she was baptized and confirmed at Silver Lake Lutheran Church. She began her primary education in country school before advancing to Northwood High School, where she graduated in the class of 1946. Fern completed one year of college at Luther College in Decorah, Iowa, before being enticed to teach at Heartland No. 6 Rural School. She earned her bachelor’s degree from Mankato State College in 1968 while teaching full time and going to evening and summer school classes.

On Oct. 23, 1949, Fern married the love of her life, Dennis Nelson, at Silver Lake Lutheran Church.

After her marriage, she taught at the Bristol No. 5 Rural School, a short mile from where Dennis and Fern lived on the Nelson family farm northeast of Joice with her in-laws Nels and Alyce (Halvorson) Nelson.

Fern also taught fourth grade in Kensett Elementary School and Hanlontown prior to her 29-year tenure teaching fifth grade in the Northwood-Kensett Public Schools. She retired in 1990.

Fern was devoted to her family and to her strong Christian faith. Professionally, she was passionate about teaching and often stated there was never a day where she didn’t look forward to teaching her students in 41 years. She was also very active in her church, first at Bristol Lutheran Church and then Sion Lutheran Church, where she maintained her membership until the time of her death.

Fern and Dennis were a popular couple — friendly, sociable and generous with time and resources. They knew most people within a 25-mile radius of their farm. They enjoyed playing cards, golfing, fishing, going to sporting events and traveling with friends, family or just the two of them. Dennis died of cancer at the age of 66 on April 18, 1995.

In 1996, Fern moved to Woodbury to be closer to her daughter, Doreen, and her husband, Jim Carter.

She adapted well to suburban life and made many new friends while keeping in touch with her beloved former neighbors, friends and family members back in northern Iowa.