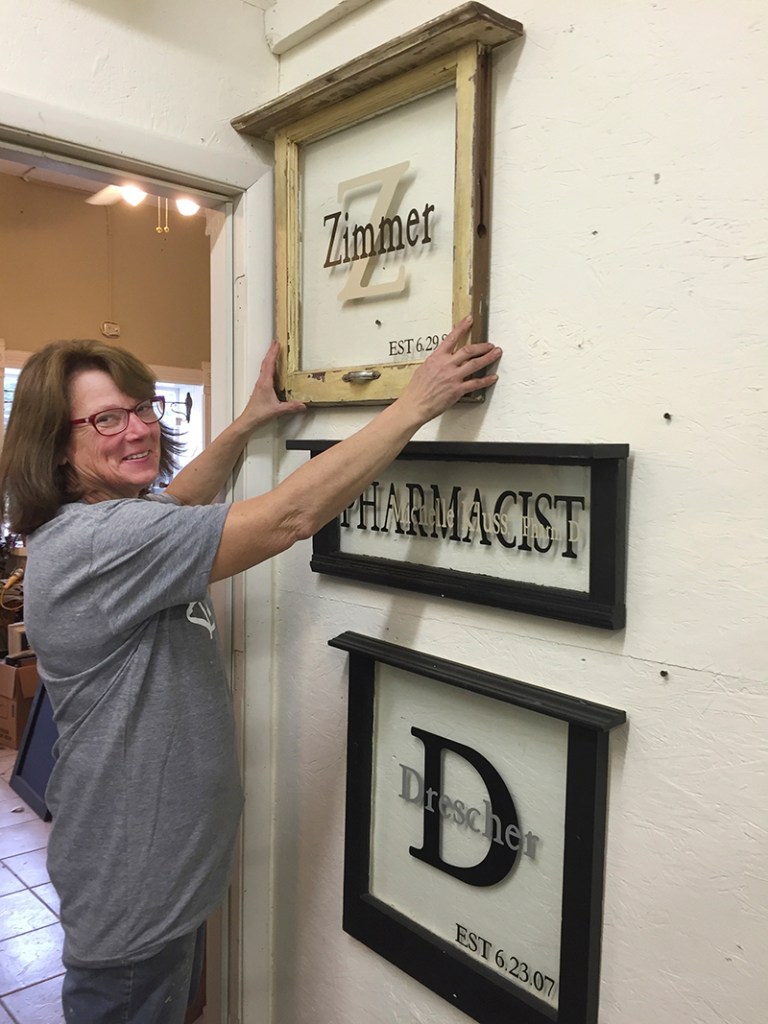 Linda Gullikson, owner of Brush Creek Boutique and Floral Shop in Bricelyn, prepares for the business’s upcoming open house by hanging examples of items she can make on the wall. - Kelly Wassenberg/Albert Lea Tribune

BRICELYN — Passion and encouragement can cause many things to flourish and bloom.

After years of working in area floral shops, Gullikson wanted to expand her love of gardening into something more, but was doubtful — despite the fact that she had a degree in horticulture from the University of Minnesota.

“I always said it wouldn’t work to have a garden center in Bricelyn, but he said, ‘No, we’re going to try it,’” she said, referring to her husband, Glenn, who passed away in 2009.

Gullikson started small with her husband’s encouragement, putting up a temporary greenhouse every year outside her husband’s gas station on Main Street.

Each year she found herself with more and more business until she  officially opened her garden center in 2002. Three years later she moved to her current location at 205 N. Main St., establishing roots for her garden center and headquarters for another long time hobby of hers: crafting.

“It’s totally different than the garden center, yet it goes together,” she said.

Gullikson said she’s able to balance her passions due to the seasonal nature of the garden center. She begins planting in March and will sell the last of her flowers, herb and vegetable plants in June before moving onto crafting. For the rest of the year she is then able to work ahead with the help of her part-time staff to ensure she has enough stock for the boutique during the next planting season and for the numerous crafting shows she attends.

“I’ve always tried to reuse things,” Gullikson said, noting that most of the materials she uses are recycled.

She has many items that are donated to her, and others are found while antiquing. She doesn’t necessarily concern herself with what she will do with an item when she accepts it.

“We save it all and will find a use for it someday,” she said.

According to Gullikson, the only thing new on most of the home decor items she sells is screws, staples and wire. Some of her boutique’s most popular items are old windows personalized with lettering, steel Christmas trees, evergreen planters and various artistic signs — which feature lettering made with wood from recycled windows and chairs, corrugated steel and birch from fallen trees.

“I really like seeing what we can make out of nothing,” Gullikson said. “It’s really fun.”

While winter hours vary, these items will be on display during the boutique’s open house from 4 to 7 p.m. Friday and 10 a.m. to 3 p.m. Saturday. Along with wine and snacks Friday evening and coffee and treats Saturday, the open house will host a door prize drawing and feature a display from Gullikson’s neighbor, Paulette Legred, who has her own line of hair products called Lis’n.

Those who are unable to attend the event can call ahead to see if the store is open. If not, she is happy to take appointments. Gullikson can be reached at 507-525-1166.

Gullikson can also be contacted for floral arrangements. While she only keeps flowers in stock during the holiday seasons, she can do flowers for any occasion, including weddings and funerals, with three-days notice.