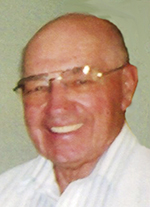 From 1969 to 1973 they lived in Clear Lake, Iowa, where he continued working for Consolidated Foods. In 1973 they moved to Worthington, where he worked for Sather Cookie Co. until his retirement in 1989. In 1992, they returned to Albert Lea and he worked with his son, Mark, for 17 years at Smiths Lawn Service.

Visitation will be from 5 to 7 p.m. Thursday at Bonnerup Funeral Service in Albert Lea and will continue from 10 until the 11 a.m. funeral service Friday at Trinity Lutheran Church of Albert Lea with the Revs. Eileen Woyan and Todd Walsh officiating.

Interment will be in Hillcrest Cemetery in Albert Lea. Military honors will be accorded by Albert Lea veterans organizations. To leave an online message of condolence, go to bonnerupfuneralservice.com.