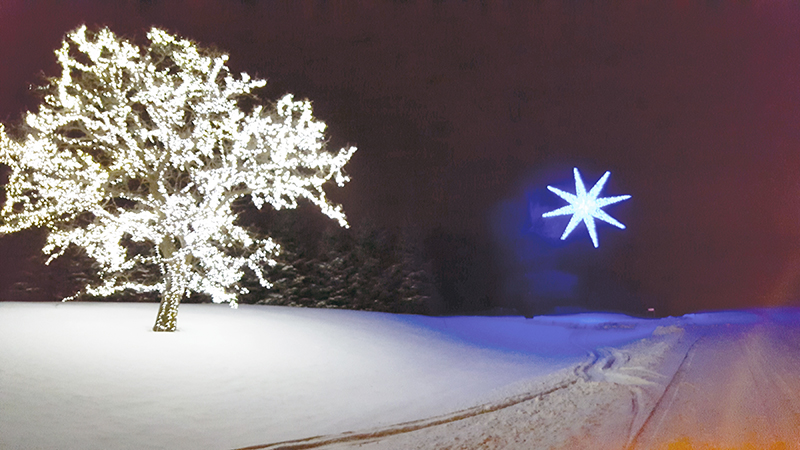 A lighted tree and star three miles north of Medford together include nearly 30,000 LED lights. Jerry Lageson of Faribault first lit the tree in 2012 to entertain those traveling Interstate 35 during the holidays and has since added the star. — Photo courtesy Karen Peglow

FARIBAULT — “He made the night a little brighter wherever he would go, the old lamplighter of long, long ago.”

Those words sung by The Browns, a mid-20th century country-folk band, have resonated with Jerry Lageson of Faribault for decades.

“It was a motivating factor,” he said.

Four years ago, Lageson became a modern-day lamplighter thanks to a gnarly red oak tree in his front yard that he strung with thousands of white LED lights to be seen by those traveling Interstate 35 during the holidays.

“God planted such a tree for a time like this,” Lageson said.

The tree, which has been seen by hundreds of thousands of motorists since 2012, was inspired by a lighted tree Lageson came across on a side street near the airport in the Twin Cities that he said was lit with “dim white lights.”

Lageson’s tree, which was first lit with 8,400 “bright white” LED

“It looked neat the first year, but it looks so much better now,” he said. “The more lights you get on there, the better it glows.”

Lageson said it takes about eight hours to string lights on the tree, which is less than the 23 hours it took him initially, and they remain on the tree — although not lit — year round.

The project, he said, comes with an expense, too.

In fact, Lageson said he has about $13,000 invested in the lights, including the lights and the cost of renting a lift to add more lights each year.

This year, a 30-foot tall eight-point star that’s outlined with 2,000 blue LED lights can be seen beside the lighted tree on Lageson’s property.

Lageson said he first displayed the star in 2013 but “didn’t feel like putting it up” the following year when his sister died.

“This year, I got motivated and put ‘er up [after a two-year break],” he said.

Since Thanksgiving, Lageson has lit the tree and the star from 4:30 p.m. to midnight with a few additional star-lightings in the morning before sunrise for early commuters.

“I think people going to work enjoy seeing something like that,” he said.

Lageson said when he first lit the tree, he had no idea of the response he would receive.

The first year, he received letters, phone calls and emails from people who had seen the tree, and over the years, it’s been sporadic.

“You never know how things will go, but I’m glad it has,” he said. “I’m glad it makes a lot of people happy.”

Lageson said the tree will be lit evenings until mid-January, and he plans on adding even more lights to the tree next year to make it even brighter.

I-35 travelers can see the lighted tree after 4:30 p.m. west of the southbound lane three miles north of the Medford exit.