Funeral services for Lyle Jasper Bird will be at 10:30 a.m. Saturday at Cross Of Glory Lutheran Church. The Rev. Mark Hillmer will officiate. Interment will be at Hartland Cemetery. Military honors will be accorded by local servicemen’s organizations, VFW and American Legion. Visitation will be from 5 to 7 p.m. Friday at Bayview/Freeborn Funeral Home and one hour prior to the service at the church on Saturday. Online condolences are welcome at www.bayviewfuneral.com. 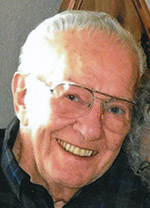 Lyle Jasper Bird was born on Feb. 25, 1929, in Winnebago County, Iowa, to Omer and Inga (Hagen) Bird. He graduated from Freeborn High School. He was inducted into the Armed Forces Dec. 6, 1950, serving on the 131st Trans Truck Co. Lyle received a Korean service medal with bronze campaign star and United Nations service medal meritorious. He was discharged Dec. 4, 1952, and was transferred to USAR on Dec. 5, 1952, for five years. Lyle was a member of the Freeborn Legion Post 552 and the Freeborn Fire Department. On Oct. 30, 1954, Lyle was united in marriage to Darlene M. Leidal at the Little Brown Church in Nashua, Iowa. He had lived in Hartland, Bath and Freeborn. Lyle owned the Bath County Store and helped his father run the Hartland Red Wing Shoe Store. He had been a butcher at Wilson & Co. in Albert Lea, retiring in 1990 after 33 years with them. He began working for the Winona Monument Co. in 1959, which was purchased by Monumental Sales Co. and has continued with them as a sales representative since. Lyle was an usher and trustee at Cross of Glory and sexton at Hartland Cemetery for many years.