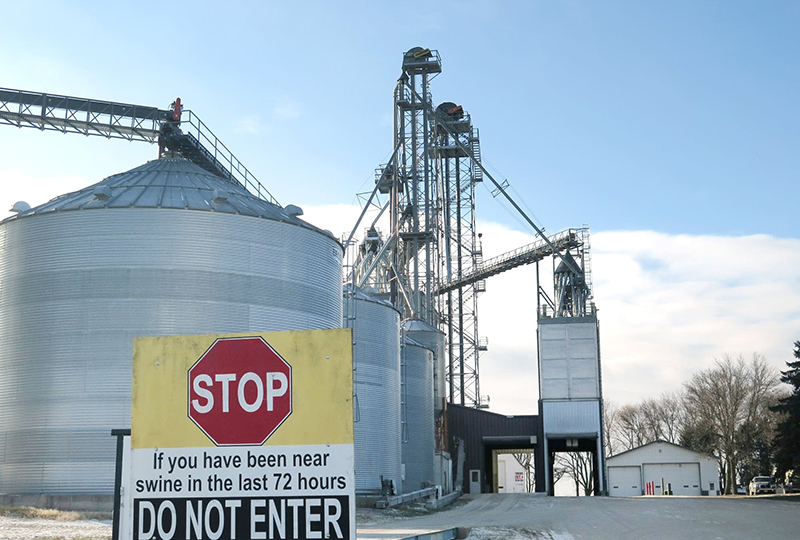 Disease is a major concern for the Spronk Brothers hog farm near Edgerton in southwest Minnesota. Starting Jan. 1, they and other U.S. livestock producers will have to comply with new federal rules designed to reduce the use of antibiotics in farm animals. Mark Steil/MPR News

Federal regulators in a few weeks will start requiring farmers to get a veterinarian’s OK before giving antibiotics to their farm animals. The new rules will be the broadest restrictions ever handed down on feeding healthy animals antibiotics.

It seems like the sort of federal rule change that might set eyes rolling and heads shaking in Minnesota farm country. But livestock producers here say they’ve been anticipating the Jan. 1 change for years and pulling back on antibiotics in response to changing consumer attitudes.

“January 1 one is not a giant bull’s-eye target for me,” said Seth Spronk, who farms near Edgerton in southwestern Minnesota. “We’re going to be just fine.”

Spronk said his farm already is doing much of what the new rules require. He stopped using antibiotics for animal growth a couple years ago. He and his family could see the practice likely would be banned, so they adjusted before they were forced to change. He’s not worried it will lead to more disease in his herds.

“We just need to make sure that we’re staying vigilant and using all the methods available to us to manage our herd health and raise those pigs the best way we know how,” said Spronk.

Nationally, an estimated 40 percent of farm-raised hogs are routinely fed antibiotics, whether they’re sick or not. The antibiotics add 3 percent at most to the animals’ growth.

But federal and other health officials are convinced unbridled use of antibiotics in animal feed is a serious threat to human health.

“The link between antibiotic use in agriculture and resistance in human health care … it’s a really big issue,” said Dimitri Drekonja, an associate professor at the University of Minnesota Medical School.

Widespread use of medical antibiotics in livestock feed is one reason bacteria have evolved and become immune to the medicines. An estimated 23,000 Americans die from drug resistant bacterial infections annually.

The new policy doesn’t outlaw antibiotics, but it does ban their use simply to spur growth, said William Flynn, deputy director for science policy in the U.S. Food and Drug Administration’s Center for Veterinary Medicine.

Requiring veterinary doctors to sign off on their use is important, he added, because they have the “training and the expertise needed to advise producers; to help them make good decisions around antibiotic use.”

The goal, said Flynn, is to “target that use to only those situations where you really need to use it, to try to slow down that resistance development.”

Any farmers caught violating the new rules will be told what they must do to comply. If that step fails to produce results, he said the FDA can choose from a series of escalating penalties.

There are many tools available to farmers to improve livestock health without using antibiotics. Air filters can trap viruses and bacteria and stop them from reaching animals. Genetic scientists are breeding new livestock lines for disease resistance. Fine tuning feed rations can improve herd health.

It’s unknown if federal animal drug regulations will become even stricter in the future, but farmers are almost certain that the consumer pressure will escalate.

“They want to know what we’re using, how much we’re using,” said Fairmont, Minn., veterinarian Paul Ruen, who’s also seen the region’s hog farmers reduce their animal antibiotic use the past few years.

“When animals are sick we can treat them,” he said. “But if they’re not sick we shouldn’t be using that product.”