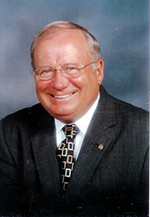 The family moved to Albert Lea, where he graduated from high school in 1958. Norm married his wife, Sandra (Dahl), on Dec. 10, 1960. They recently celebrated 56 years of blissful marriage. In 1970, Norm graduated from the University of Minnesota with a degree in accounting. He worked for Nekoosa Papers in Port Edwards, Wisconsin, and Packaging Corporation of America in Manistee, Michigan. In 1988 he began working as division controller for Toshiba of America in Mitchell, South Dakota. After a long, successful career, Norm retired from Toshiba in April 2001. Following retirement, Norm and his wife, Sandra, moved to Pompano Beach, Florida, where they became permanent residents.

Norm was a member of All Saints Lutheran Church in Tamarack, Florida. He was also an active member of the Us Too, Prostate Cancer support group in Margate, Florida.

Norm was preceded in death by his parents Harvey and Hazelle Sorensen; brother, Richard Sorensen; and nephew, Randy Knutson.

He is survived by his wife, Sandra; son, Craig Sorensen, and wife, Terryle; son, Arden Sorensen; three grandchildren, Steven and wife, Randi, Melissa and husband, Curt Filkins, and Aubrianne and husband Jason Huizenga;  and four great-grandchildren, Alyxiss and Gavin Filkins and Madalynn and Amelia Huizenga. He is also survived by brothers Keith Sorensen and Kenneth Sorensen and wife, Diane; and sisters Ardell Knutson and Eunice Maberry.

Norm was proud of Sandra’s volunteer work in the many communities they lived in. He was happy she was volunteering, but he would say “Please don’t volunteer me, too.”

Norm was most proud that his grandchildren and their families have made the career choice to proudly serve their country in the United States Air Force.

A celebration of life will beat 11 a.m. Tuesday at All Saints Lutheran Church, 7875 W. McNab Road in Tamarac, Florida. Lunch will be served in the church fellowship hall afterward.