Funeral services for Peggy Kay Sorenson of Geneva will be at 11 a.m. Wednesday at Community Lutheran Church in Geneva. The Rev. Dr. Kristen Venne will officiate. Interment will be at the Geneva Cemetery.

Visitation will be from 5 to 8 p.m. Tuesday at Bonnerup Funeral Service, Albert Lea, and one hour before the service at the church. 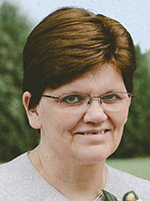 Peggy was born Oct. 5, 1957, in Albert Lea, the daughter of Allen and Evelyn (Rupp) Anderson. She attended Clarks Grove Elementary School and graduated from Albert Lea High School in 1976. She continued her education at Riverland Community College.

On May 23, 1981, Peggy was united in marriage to Rodney Sorenson.  She was a loving and devoted mother of three: Tami, Kristine and Eric. Peggy treasured quilting, baking and spending time with her family and friends, especially her granddaughter, Brynlee. Throughout her life, she had worked at the Ellendale Standard Cafe, Trades Office Products and North Central Plastics. Most recently, Peggy cherished working in the cafeteria at Ellendale Elementary School, where she loved being able to interact with all the children and her co-workers.

She was preceded in death by her grandparents; her father Allen Anderson; sisters Carolyn (Anderson) David and Jane (Anderson) Dahle; father-in-law and mother-in-law Norris and Hildred Sorenson; and niece Ann Broitzman.