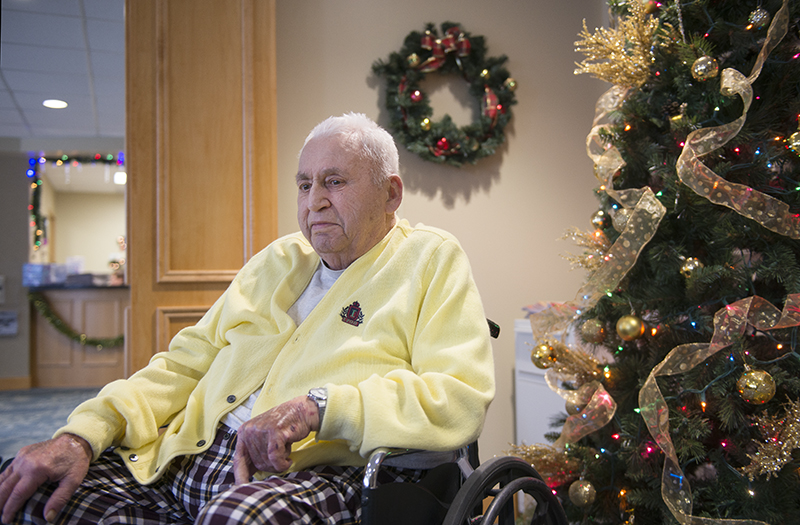 Thorne Crest Senior Living Community resident Leonard Cihlar was 13 when he and his family found out that his brother died in the Pearl Harbor attack. The experience prompted him to join the U.S. Navy four years later at the age of 17. - Colleen Harrison/Albert Lea Tribune

Cihlar, now 88, was 13 when he and his family received word at their New Prague home that his brother, Lawrence Cihlar, died in the Japanese surprise attack on Pearl Harbor in Hawaii. Lawrence Cihlar, known to his brother as “Larry,” was aboard the USS Arizona, and his body was never recovered.

“I will never forget when Mom and Dad got the telegram that he was killed,” Cihlar said. “They took it real, real hard. They just stood there. They didn’t know what to do.”

Lawrence Cihlar was one of more than 2,400 people from the United States who died that day, and who people around the nation remember today on Pearl Harbor Day.

Lawrence Cihlar, a Pharmacist Mate Second Class, was described as a “mama’s boy,” who was well-behaved and well-respected in the community, his brother said.

“I was awfully proud of him,” Leonard Cihlar said.

When he heard that his brother died, Leonard Cihlar said he knew he wanted to join the U.S. Navy.

When he was 17, he persuaded his mother to agree to sign him up. At that time, it was November 1945, and World War II had ended a few months before.

“It was the best thing I did,” he said. “I was able to do something for my country and then myself,” he said, noting he learned responsibility and determination.

He trained in San Diego, California, and was then shipped to Hawaii — where his brother had died.

In 1946, he was assigned to the USS Wildcat as a Fireman Second Class. He said his ship was responsible for making sure there was safe water for drinking, according to an article in the Faribault County Register.

He later was assigned to the Bikini Atoll in Micronesia to take part in a nuclear testing mission called  Operation Crossroads. The purpose of this testing, the newspaper wrote, was to investigate the effect of nuclear weapons on naval ships.

Leonard Cihlar said they were told to close their eyes as the bombs went off. After the bombs were detonated, the men worked 24 hour shifts, testing the ships, cleaning the ships and mopping the decks.

“The soldiers aboard the Wildcat knew their water was salt-free, but what they did not know was that it was not radiation free, and they continued to not only drink the radioactive water, but played in the Bikini Atoll waters,” according to the newspaper.

He is classified as what is now known as an atomic veteran because of his exposure to radiation.

After this testing, Leonard Cihlar served on the USS Siboney and served through Nov. 12, 1947.

He said after he returned home, he worked in numerous trades, including construction, in health insurance sales and as a security officer at a bank.

He has had several health problems that are believed to have been caused from his exposure to radiation in the Navy, including bladder and kidney cancer, as well as skin problems.

Leonard Cihlar, who previously served as commander at both the American Legion and VFW post in Wells, has lived in Thorne Crest for about three months.

He said he hopes to eventually live in a veterans home in Minneapolis, but in the meantime has enjoyed living at the Albert Lea facility.

He said he enjoys the accommodations, the food and the care he receives.