Memorial services will be at 11 a.m. Wednesday at Bethel Lutheran Brethren Church, 3906 Bluebill Ave. in Joice, Iowa, with the Rev. Kevin Olson officiating.

Family will greet friends at the church from 10 to 11 a.m. prior to the service. 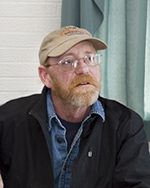 Inurnment will take place at a later date at Bethel Lutheran Brethren Cemetery.

Rudy was born June 15, 1960, in Albert Lea to Jerome and Mavis (Olson) Rognes. He was baptized and confirmed at Zoar Lutheran Brethren Church in Lake Mills and graduated from Lake Mills High School in 1979. He spent his younger years growing up on the family farm in Worth County, Iowa. When he was 13 the family moved to Lake Mills. During his younger years he developed a love for motorcycles and started riding at an early age.

Rudy worked with his older brothers Jerry and Harvey at Rognes Brothers Excavating; he then worked for GM Contracting for several years until he joined his older brother, Warren, at KRI Co./Rognes Corp. He returned to Rognes Bros for the last several years. He had a reputation as being a great dozer operator; he was a natural at operating any equipment. He was the kind of operator you could leave alone and not worry about the quality and finish of his work. Fellow workers enjoyed working with Rudy because he was a calm and smart worker.

Rudy married the love of his life, Linda Boleneus, on March 27, 1999, in Las Vegas. They made their home on a small acreage near Bear Lake in Freeborn County. Rudy loved dogs and raised American bulldogs for many years. He loved family and was especially proud of being a great-grandpa. He was an avid Iowa Hawkeyes fan.

Rudy and Linda had many dogs over their life together — Stymie, Jubi, Hefner, Freckles, Bruiser and Pongo. They enjoyed the company of them very much.