Seeing some problems on the horizon, counties seek delay in new buffer law 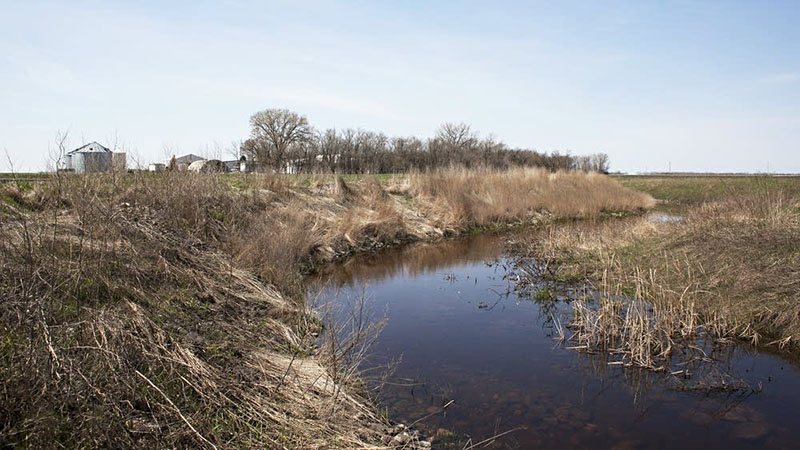 This unnamed channel of Whiskey Creek cuts across a farm near Rothsay. Sections of the channel have been widened and rebuilt to provide a better buffer between adjacent farmland and the water. Ann Arbor Miller/MPR News file

County officials are seeking a delay in implementing a law designed to prevent runoff pollution into lakes and streams.

There’s wide support for the concept of buffers, but counties said there is confusion and questions about details of the law for it to be successful.

“I’m not suggesting that this should go away because I think this is part of the solution,” said Roseau County Commissioner Jack Swanson, “but I think we need to understand better what it is that needs to be done instead of rushing to put it in place.”

The buffer program, set to take effect in November, was a signature issue for Gov. Mark Dayton last legislative session. The idea is that 50 foot strips of permanent vegetation will filter runoff, mostly soil, fertilizer and chemicals from farm fields, before it reaches rivers and lakes.

Swanson, the past president of the Association of Minnesota Counties, said he heard from many county officials about the buffer law. A key concern is who will pay to implement and enforce the measure, he said.

Last year, the Legislature included $10 million in the tax bill to help counties cover the cost, but the governor vetoed the bill, leaving the program unfunded.

“What I’m hearing from counties, especially in the north, is if the money’s not there, the county has no interest in taking on that enforcement role,” Swanson said. “We have to make that decision by the end of March and it seems unlikely there will be a tax bill ready by that point.”

If counties choose to not enforce the buffer law, that responsibility would fall to the Minnesota Board of Water and Soil Resources.

John Jaschke, the board’s executive director, expects the Legislature will approve funding for counties to manage the buffer program.

“It does make the most sense by a long shot to have something like this done as a local land management program,” Jaschke said.

Another big issue for counties is how landowners will be compensated for land taken out of crop production and planted with permanent buffer vegetation.

Some farmers planting buffer strips now are able to enroll in the federal Conservation Reserve Program and get an annual per-acre payment for that land.

But after the state buffer law takes effect farmers won’t be able to enroll the land in the CRP program. Jaschke said the state is negotiating with the federal government to adjust the rules.

Barry Nelson, a Becker County commissioner and chairman of the Association of Minnesota Counties Natural Resource and Environment policy committee, sees adequate compensation for farmers as perhaps the biggest unresolved issue with the buffer law.

“This is a taking. The state can’t just take control of our land,” he said. “This is our livelihood so it’s a real concern for farmers and as you know the commodity prices are down and there are some struggling farmers out there so it’s a real problem.”

Nelson farms near Detroit Lakes and has enrolled buffer strips in the CRP program. He estimates he could get $140 per acre in CRP compensation.

“If you’re only doing three acres, that doesn’t sound like much,” he said, “but you multiply that over the whole state and that’s a lot of money.”

Jaschke said he’s hopeful the federal government will agree farm land where buffers are required will be eligible for the Conservation Reserve Program.

But even if that happens, he said, there’s no guarantee the federal government will provide enough CRP funding to cover all Minnesota farmers who want in.

“We’re also looking at trying to do everything we can to get additional federal and possibly state money to local governments to offer landowners some financial assistance if they want to use that as a way to accomplish getting the buffers installed,” Jaschke said.

Another contentious issue BWSR is working to address is exactly what farmers need to do to comply with the buffer law. The law includes a provision for “alternative water quality practices” to mitigate the need for a buffer. Counties say they’ve been getting confusing and sometimes contradictory information about what alternative practices are acceptable under the law.

“I think it’s very much more helpful to put some things out of that we can say are already considered to be sufficient alternative practices rather than wait for people to ask us,” Jaschke said. “We expect to have some of that out by spring.”

Rep. Dan Fabian, R-Roseau, said he is willing to consider delaying or modifying the buffer law to address concerns raised by county officials. Fabian, the House Environment and Natural Resources Policy and Finance committee chair, said the law will need the support of local officials to be successful.