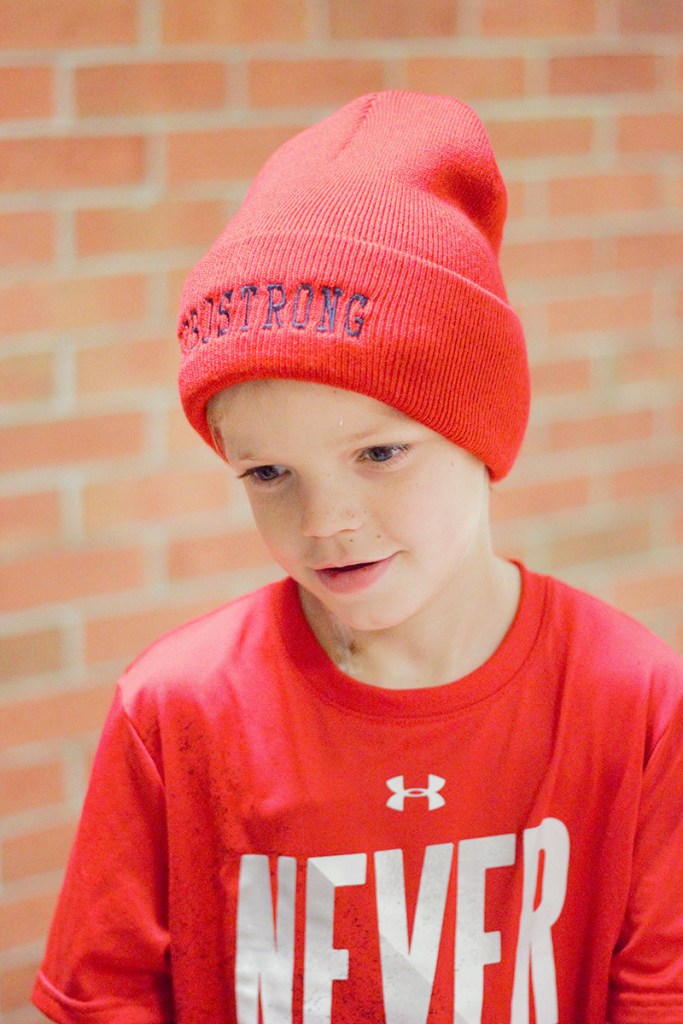 Seven-year-old Bebo Getchell was diagnosed with leukemia on Halloween of this year. He is receiving care at St. Marys Hospital in Rochester. - Provided

“No one ever wants to hear that a 7-year-old has cancer.”

That was the sentiment echoed by Joanna Carroll when describing the community’s initial reaction to finding out one of its own would soon be facing a long road to recovery.

Bebo Getchell was diagnosed with leukemia — a type of blood cancer — on Halloween this year, after going to the emergency room the day before for feeling run down and sick. 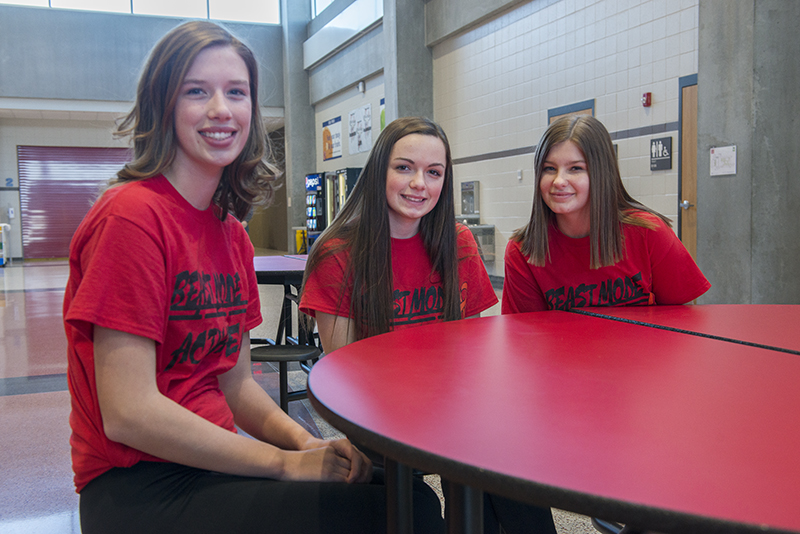 Emma Beyer, Amber Hagen and Halle Schrader wear “beast mode activated” shirts they bought in support of Bebo Getchell. United South Central had a buzz bash where people buzzed their heads or dyed or braided their hair, among other activities, in support of Getchell’s battle with leukemia. – Colleen Harrison/Albert Lea Tribune

The first-grader is now in the middle of an intense 28-day inpatient treatment involving intense chemotherapy. His parents Evan and Dara Getchell take turns staying in Rochester with him while he receives treatment at St. Marys Hospital. Bebo Getchell is the third oldest of eight children — the youngest of which was born just last month. The newborn, Lyla, goes with her mother wherever she goes, while the rest of the Getchell siblings — Riley, Byron, Leeland, Ivan, Silas and Remi — stay with grandparents and other relatives while continuing to go to school in Wells.

The surrounding community rallied around the family upon hearing the news of Bebo Getchell’s diagnosis. Carroll said her response, as well as the response of others, was to find out what they could do to help the family through the coming ordeal. 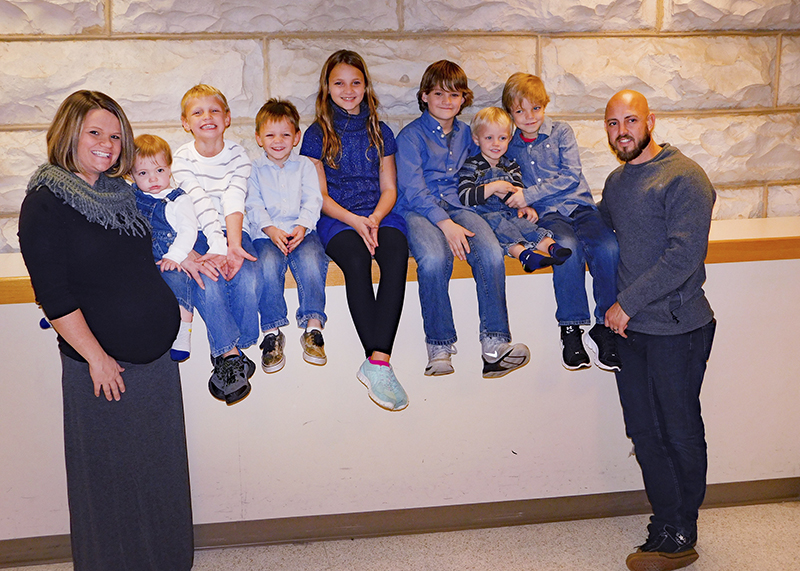 Bebo Getchell, second from right, is the third oldest out of eight children. – Provided

For three students at United South Central, their reactions were a mixture of shock and a determination to find a way to support the family, as well.

Emma Beyer, Amber Hagen and Halle Schrader all know the Getchells through school, and Beyer and Schrader have babysat the Getchell children and recently helped pack up some of the family’s things.

“I couldn’t even imagine what they’re going through,” Hagen said.

Schrader said the 7-year-old has always been rambunctious and full of life when she has been around him, and said the community has rallied around the family. 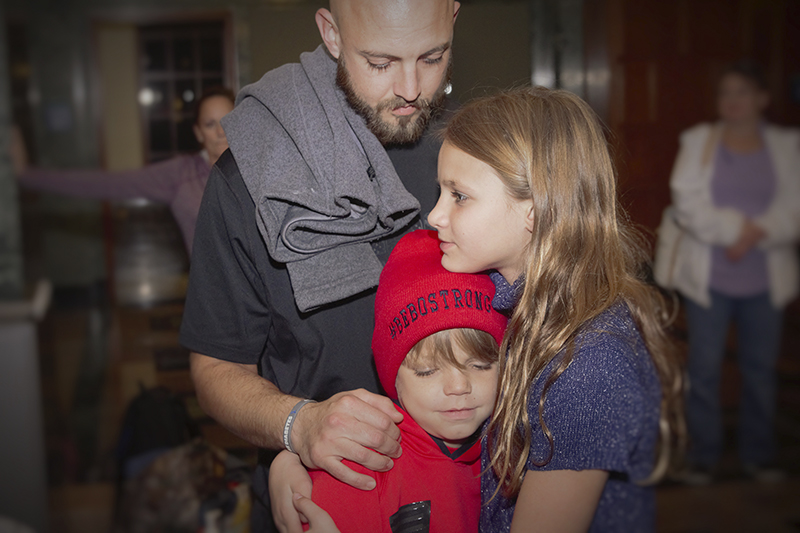 “A lot of people were really shocked,” Beyer said, but added that she’s optimistic about the boy’s perseverance. “He’s a tough little guy with a really big heart.”

A “buzz bash” took place, where students and faculty at United South Central raised money for the family and buzzed or cut their hair, dyed and braided their hair in support of Bebo Getchell. There was also a bake sale. Shirts reading “Beast mode activated” and “Bebostrong” were for sale. The 7-year-old even made a surprise appearance at the event, donning the mask he must wear in public while he undergoes treatment, leaving him with a compromised immune system. 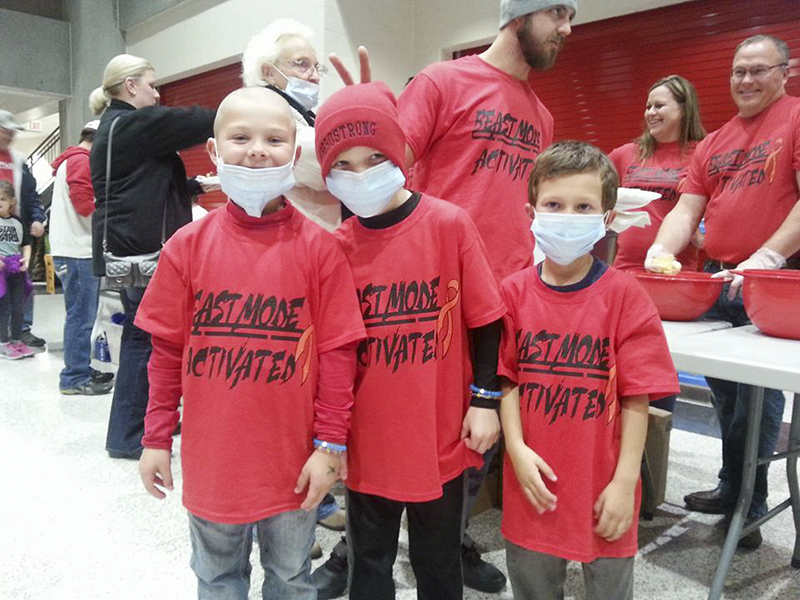 Bebo Getchell, center, makes a surprise appearance at a buzz bash in his honor at United South Central. Getchell must wear a mask while out in public as his immune system is compromised due to his ongoing battle with leukemia. – Provided

Another benefit is in the works to help offset medical, transportation and all other costs that have mounted up for the family. Carroll, a special education paraprofessional at United South Central, said the benefit will run from 10 a.m. to 2 p.m. Saturday in the commons of United South Central, 600 11th St. in Wells. There will be a youth wrestling tournament as part of the event that starts at 9:30 a.m., which pays homage to Bebo Getchell’s enthusiasm for the sport. There will also be a silent auction with prizes and items donated from area and regional businesses, and there will be a Be the Match registry drive going on for bone marrow donation, as well.

For those who are unable to attend Saturday’s event, Carroll said there is a benefit account set up for the Getchells that can be directly donated to at any Wells Federal Bank branch, and there is a GoFundMe campaign titled Team Getchell. She said those interested in registering to be bone marrow donors can also do so online at http://Join.BeTheMatch.org/TeamGetchell.

Carroll said the outpouring of community support has been touching, and they are continually looking for any way to help support the family.

“It’s been amazing, the support of the community,” Carroll said. “Small towns are good at that. … Anything we can do to help them.”