His first appearance on the charges in Faribault County District Court was Monday. Conditional bail was set at $5,000. 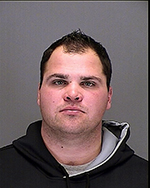 Court documents state Bathke was charged after a Wells Police Officer met with the alleged victim at about 1:30 a.m. She was described as “crying, breathing heavily and appeared unsteady on her feet.”

The alleged victim — who was known to Bathke — reported she had a verbal argument with him at a party.

Bathke allegedly pushed her and would not allow her to enter the house after she walked home from the party. He reportedly pushed her twice, with the second push knocking her to the ground.

Court documents allege Bathke then got on top of her, put his hand over her throat and exerted pressure, causing her not to be able to breathe.

He reportedly then let go and threatened to beat her up. He allegedly threw keys that struck her jaw and took her cellphone away when she said she was going to call 911.

Court documents state Bathke told officers the argument was just verbal, and he blocked her when she attempted to push him.

Bathke’s next court appearance is scheduled for Monday.

Domestic assault by strangulation carries a maximum sentence of three years in prison and a $5,000 fine.