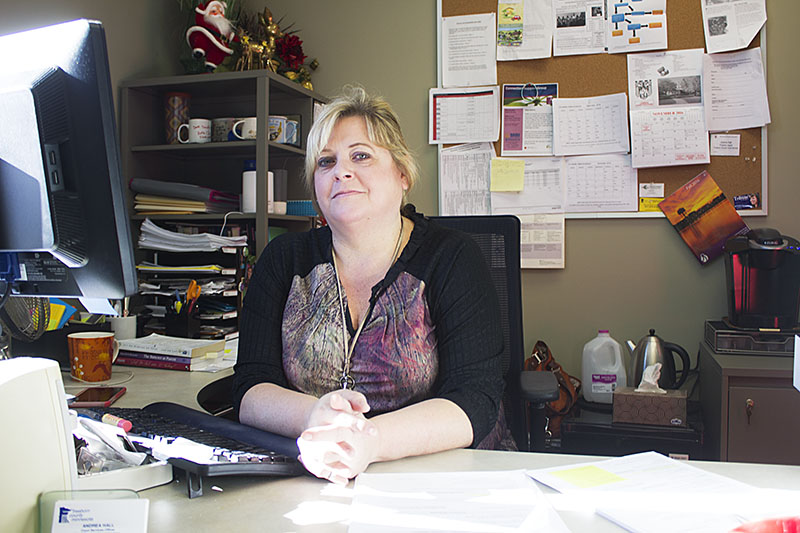 Addressing domestic violence can be difficult. The cycle can repeat itself, and perpetrators are sometimes placed on probation. That is where one Albert Lea woman is working to make sure the cycle ends.

Andrea Hall, 48, is a probation officer in Freeborn County.

After a few years of serving in the Army, Hall worked at Farmstead Foods and later returned to college at 24.

“I ended up signing up as an advocate at the Crisis Center, thinking it would be interesting and educational and good for a resume, and it ended up just being something I was pretty passionate about,” she said.

“Domestics are tough,” she said. “They are tough cases, because if somebody burglarizes your house and is a stranger, it is pretty easy to be mad at the person that violated your space. With domestics, the person who violated you is somebody you probably still love and want to be with. And so all of those dynamics are just so much different. They’re just complicated.”

Domestic violence has implications beyond the abuser and the victim, Hall said.

“Domestic violence affects a lot of kids,” she said. “You think about some of these people that come through here, well that’s what they grew up with. So, when you start talking to them about doing something completely different in a relationship, like having a healthy relationship, sometimes it’s really tough because they grew up with that same exact type of environment.”

Hall, who has been a probation officer for almost 16 years, said she is sometimes placed in a tough position from overseeing perpetrators who are used to manipulating their victims.

“Especially manipulating women,” she said. “And when you make them tow the line and make them accountable, you get quite the rep.”

To Hall, some perpetrators can change, while others have a tougher time stopping abusive behavior. She said abusers know how to control situations and who they can abuse.

Though partners can get on each other’s nerves, it is never an appropriate response to be abusive, Hall said.

“I am not telling you your spouse is perfect,” she said.

Hall said motivating abusers to quit can be tough.

“I think there has to be a motivation, and a lot of the times the only motivation to stop abusing is jail.”

Hall wants victims to know there are people who care about them.