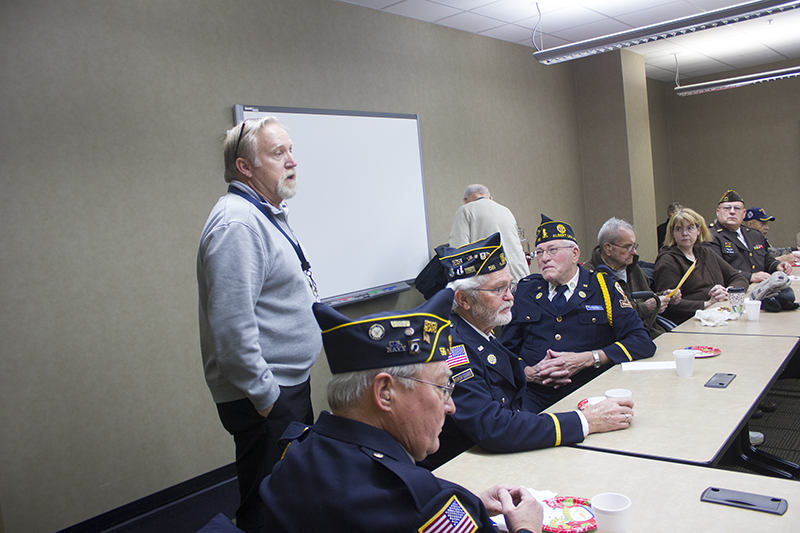 The Freeborn County Board of Commissioners honored World War II veterans Tuesday during a special ceremony at its board meeting.

At least 13 World War II veterans received recognition during a ceremony at the board meeting.

“Freeborn County wouldn’t be where it is today if it wasn’t for you people,” said Chairman Jim Nelson.

“Thankful to be alive,” he said.

Mowers said he was thankful to be honored by the board.

“It’s nice to be noticed, recognized,” he said. “For years we did not get much recognition.”

Andy Dyrdal, who served in the Air Force during World War II, was stationed in California during the Pearl Harbor attack, and he was in England as a control tower operator on D-Day.

He remembers being told that the war was over in 1945 while overseas.

“I was out by Christmas,” he said.

Ernie Dohmeier, who served in the Navy from 1943 to 1946, was modest about the recognition.

Johnson, who suffered injuries during the conflict, remembered when he was told the war was over and advice he was given.

Other World War II veterans honored include Air Force veteran Wesley Nelson; Navy veterans Marvin F. Mathis, Don Drommerhausen and Roger Bailey, who served in the South Pacific; and Army veteran Dennis Bank. Veterans Kenny Anderson and Vince Engelby, who served together in the Philippines, attended the ceremony, and Lupe Gasca, a Marine who was stationed in the Pacific, was also honored. Also recognized was Army veteran George Adkins, who served in the Third Infantry Division in North Africa, Sicily, France and Germany and who was at one point a prisoner of war.

Veterans were given cookies and refreshments after the ceremony.

District 4 Commissioner Chris Shoff’s father, Niles Shoff, served in the 725th Army Battalion, 70th Infantry Division of the United States Army from 1943 to 1946, especially in the European Theater. He received two battle stars and was a staff sergeant.

“The people greeted him with coffee and donuts at the train station,” he said.

Niles Shoff came to Albert Lea after the war and started Shoff Chiropractic.