1st Somali-American lawmaker sworn in after trip to homeland 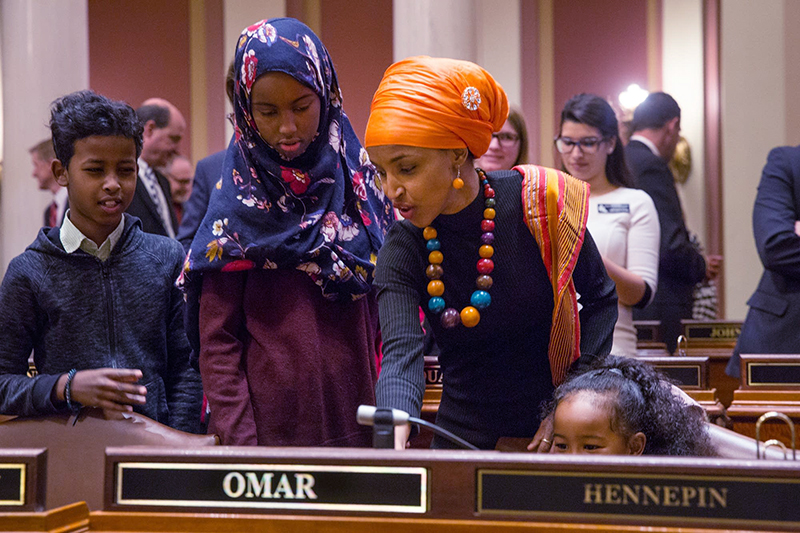 Rep. Ilhan Omar, DFL-Minneapolis, shows her three children her desk inside the House Chamber during the first day of the 2017 legislative session on Tuesday. - Evan Frost/MPR News

ST. PAUL — Ilhan Omar took the oath as the nation’s first Somali-American lawmaker this week, just days after an 8,500-mile journey that retraced her path from her war-torn homeland to Kenya to the Minnesota Capitol.

In an interview with The Associated Press, the Democrat said the trip gave her essential perspective as she embarks on her new career as a state representative.

“To walk the same streets I walked as a kid, as a refugee, to think about the other kids who now are adults raising kids in Somalia, who are still living in a refugee camp … it’s hard not to believe there’s a bigger purpose,” said Omar, 34.

Between her trip to Africa and a whirlwind of national TV appearances since her November election victory, Omar hasn’t had a moment to decorate her new Capitol office. It’s currently adorned only with two wooden Somali milk containers — one painted with the blue background and white star of the Somali flag.

Omar said she considers her election to be a “counter-narrative” to President-elect Donald Trump, who has proposed a temporary ban on allowing Muslim immigrants into the country. During his lone campaign stop in Minnesota, he said the state had suffered from the influx of refugees.

As a devout Muslim, a refugee and a mother of three, Omar said her politics are influenced by far more than her Somali heritage.

Omar and her family fled Somalia when she was just 8 as civil war tore apart their country, spending four years in a Mombasa, Kenya, camp with tens of thousands of other refugees. At age 12, the family finally got sponsored to move to the United States, eventually settling in Minnesota.

That story is familiar in Minneapolis, home to the largest population of Somalis outside of the country and a neighborhood dubbed “Little Mogadishu,” where massive high-rise apartment buildings cast shadows over dozens of east African coffee shops, eateries and markets. More than 40,000 Somalis live in Minnesota, according to the latest census figures, wooed by generous social services and beckoned by the sense of community among the diaspora.

But none of her neighbors had risen to the level Omar reached when she was sworn in on Tuesday.

“Oftentimes when people think about the second chance they may get in a new home, they don’t think of all the doors being open for them,” she said. “It is something they can all point to and say: ‘Look at Ilhan,’” she said.

No stranger to politics after working for a city councilor and running campaigns, Omar never asked for permission to run; she said she’s never felt she had to. She took on one of the Legislature’s longest-serving members, a 44-year incumbent in the Democratic primary and won.

But it wasn’t just fellow Somalis who powered her into her seat. While a third Democratic candidate, another Somali-American immigrant, overwhelmingly won the district’s Somali-heavy neighborhoods, Omar also built up support among college students at the nearby University of Minnesota, young professionals, retirees and more.

Her November victory in the heavily liberal district was all but assured even before a Republican dropped from the race. Mohamud Noor, a local nonprofit director whom Omar defeated in the primary, said her victory gives Omar a greater responsibility than the average lawmaker, both as a liaison for issues affecting the immigrant community and as a symbol for them.

“She is the reassurance that there is inspiration, there is hope,” Noor said. “The divisiveness, the hate — that dissipates because of her being at that level.”

But Omar will face the political reality of power in Minnesota’s Legislature, where Republicans are in control. Her legislative wish list goes well beyond the issues impacting her community, from streamlining some business regulations to restoring voting rights for released felons and police reforms in the wake of the tide of officer-involved shootings.

Still, Omar said she understands the historic significance of her election — as does her eldest daughter.

“She thinks about the kinds of history she can make,” she said.