Annette Donovan, 85, of Litchfield, formerly of Albert Lea, died early Monday, Jan. 23, 2017. A Mass of Christian burial will be at 11 a.m. Monday at St. John’s Catholic Church in Darwin. Visitation will be from 2 to 5 p.m. Sunday at the church with a parish prayer service at 5 p.m.  Interment will be at St. John’s Catholic Cemetery following the funeral mass with a luncheon at the church afterwards. 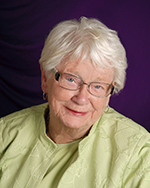 Annette Aitchison, the daughter of Lisle and Ida Mary (Schultz) Aitchison, was born Oct. 13, 1931, in Albert Lea. Annette graduated from Albert Lea High School. She received her degree from the University of Minnesota in health care technology. On Sept. 6, 1952, Annette was united in marriage to John “Jack” Donovan Jr. of Albert Lea.

She is preceded in death by her parents; husband, Jack; son, Timothy; and sisters Amy McKey, Ardith Thompson, Alice Ryan and Alleen Morley.

Memorials are preferred to Smile Train or American Lung Association.