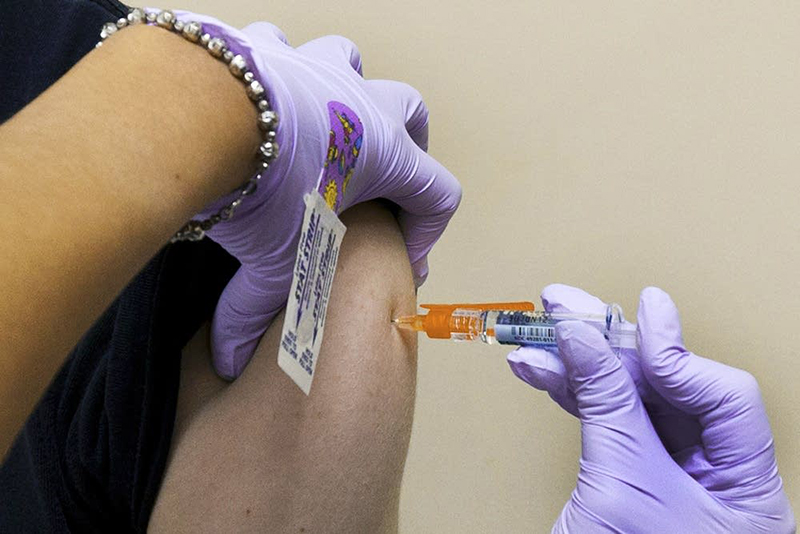 Many people haven't been vaccinated for the flu, and cases are becoming more prevalent. Experts say it's not too late to get a shot. Nikki Tundel/MPR News file

Minnesota and neighboring states are seeing an increase in the number of flu cases.

It’ll likely be several more weeks before flu season peaks in Minnesota. There’s still time to get a flu shot, but federal data show that most people haven’t bothered.

Public health officials are publicizing the increase in flu cases with hopes that the information will spur people to rush out for a flu shot. But if recent trends hold, it may not.

Early flu season surveys show that only about 40 percent of people nationwide had gotten a flu shot by November.

That number may be higher now, but probably not by much since the holidays tend to push avoidable tasks like getting a flu shot to the back burner.

It’s too early to tell how flu vaccination rates will end up this season, said Karen Martin, an epidemiologist with the Minnesota Department of Health.

“To see that less than half of the population has received flu vaccine,” she said, “it’s disappointing.”

Vaccination rates leveled off in fall 2015 after years of rising steadily. The previous flu season saw a particularly harsh outbreak of the virus, coupled with a vaccine that wasn’t very effective. It wasn’t well-matched to the dominant flu strain that year.

Plus, a nasal form of the vaccine popular with people who dislike shots hasn’t been available.

“I think taking the nasal mist off of the market probably didn’t help our numbers as far as uptake of vaccine and we’re certainly aware of that,” Martin said.

In the short-term, Martin said she fears a dip in vaccination rates could result in more hospitalizations and deaths.

Further in the future, she worries it could affect flu vaccine manufacturing.

Martin said there will be multiple strains of the virus circulating from now until April or May, and it’s not too late to get a shot.

“We’ll never tell anyone that it’s too late [to get vaccinated] because No. 1, influenza is unpredictable and No. 2, it is circulating for a good portion of the year,” she said.

The influenza A virus known as H3N2 appears to be the dominant flu strain this season. It’s particularly hard on elderly people and very young children. The last time it edged out other flu strains was just two years ago. Ten children died from flu complications that flu season.