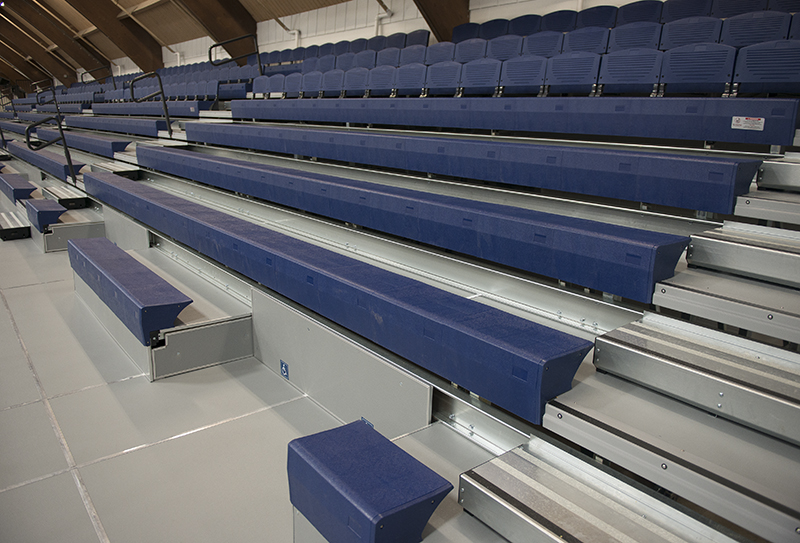 Some of the bleachers at Albert Lea City Arena were recently updated. - Colleen Harrison/Albert Lea Tribune

Approximately 450 seats have been replaced, and six areas for more wheelchair access have been installed at Albert Lea City Arena.

The bleacher replacement was on the north side of Roy Nystrom Arena, and the project cost about $140,000.

“The bids came in a little cheaper than what we expected, which is always nice,” said Recreation Manager Bob Furland.

The seats are navy blue and are a change from the original seats that were different colors.

The project took a month. The original bleachers were taken out, and then the area was painted and cleaned before new seats were installed. The project was completed Friday. The seats have been in use for a few days.

A wheelchair ramp was added in one spot.

“It’s awesome for the arena,” Furland said. “It was a really needed project, especially the handicap accessibility. It was so hard before, and this will give everybody equal access to see the arena really well during hockey and figure skating events.”

Officials are considering work in the arena’s back rink in two or three years.

“We’re kind of evaluating the other side of the front arena to see the need and how many seats we would need over there,” Furland said.

He thanked city staff and administration for their role in the project.

City staff are taking other steps to improve the building, including flooring work and continuing air quality efforts. New air conditioners will be installed this summer.