Memorial services for Brant E. Storvick of Albert Lea will be at 5 p.m. Tuesday at the First Lutheran Church chapel in Albert Lea. The Rev. John Holt will officiate. Interment will be in Lakewood Cemetery at a later date. Friends may visit with family one hour before services at the church. 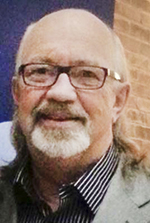 Brant graduated from Albert Lea High School and then started his career in the car business, working at Dave Syverson Ford and later retiring from Holiday Cars in Austin.

He married Laure Wallin and to this union two daughters, Nicole and Megan, were born. They were later divorced.

Brant enjoyed taking care of his yard, had a great interest in cars and loved being near and on the water. Waterskiing and boating were among his favorite pastimes.

He is survived by his daughters Nicole Storvick (Michael Ludowese) of Albert Lea and Megan Storvick of Cedar Rapids, Iowa; granddaughter, Abigail Thompson, of Albert Lea; his father, Roald (Rosalee) Storvick, of Austin; his sister, Kris Brandt (Cedric Thomas), of Albert Lea; and his nephews Dagan (Ruthie) Brandt and their children Dexter and Maxwell and Alex Brandt.

Brant had a kind and gentle spirit that was often misunderstood. His daughters brought much pride and joy to his life.