Cabin Coffee Co. specializes in coffee but offers much more 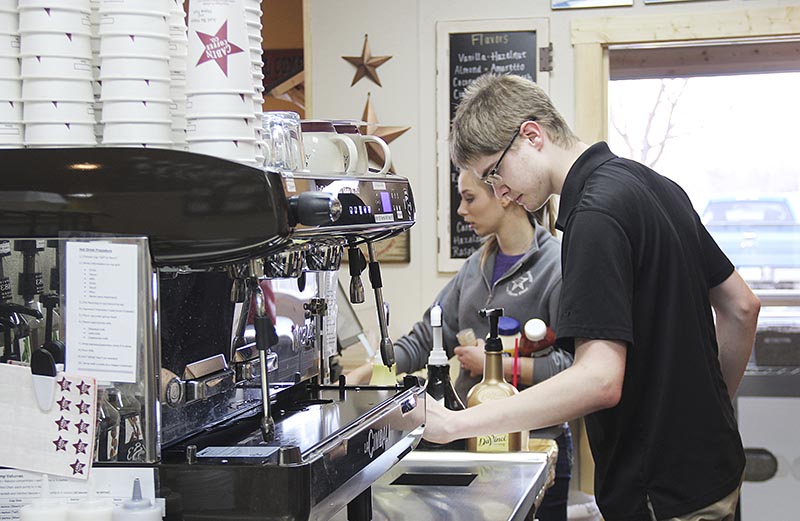 Nate Schultz cleans up a machine Friday at Cabin Coffee Co. in preparation for the restaurant's opening today as McKenna Robinson performs other duties in the back. Sarah Stultz/Albert Lea Tribune 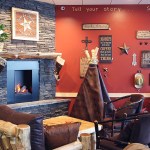 Cabin Coffee Co. features a cozy, laid-back environment, including an area for children and an area made to look like a fireplace. Sarah Stultz/Albert Lea Tribune 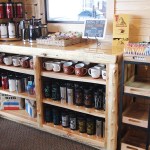 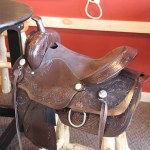 The business includes a few alternatives to regular seating, including this saddle attached to a bench. Sarah Stultz/Albert Lea Tribune 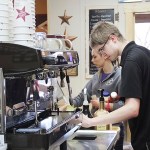 Nate Schultz cleans up a machine Friday at Cabin Coffee Co. in preparation for the restaurant’s opening today as McKenna Robinson performs other duties in the back. Sarah Stultz/Albert Lea Tribune

A new company to Albert Lea will open its doors today — seeking to offer a dining experience for every taste.

Known for its fresh-roasted coffee, the Cabin Coffee Co. brand was started in Clear Lake, Iowa, by Brad and Angie Barber. The Barbers own two locations in Clear Lake and Mason City, and there are several others that are franchise-owned in Georgia, Colorado, Indiana, Iowa, Minnesota and Wisconsin. Other locations in Minnesota are in Chatfield and St. Charles, with one soon to open in Plainview.

Josh Orchard, who owns the Albert Lea franchise at 152 Bridge Ave. with his wife, Sarah, said he and his wife worked with local contractors to expand and renovate the space most recently used as Liberty Tax between Fountain Warehouse Liquor and Papa Murphy’s.

Orchard, whose full-time job is as an industrial chemical sales representative, said he has been a customer of Cabin Coffee Co. for many years.

He, his wife and their four children moved to Clear Lake seven years ago from Pine Island. On their website, they state that during their many trips back and forth, they would often stop in Albert Lea to have a picnic along Fountain Lake. They came across the location overlooking the lake and knew this would be their new spot to enjoy coffee.

“It’s a really fun brand,” said Orchard, who noted he has always had a love for coffee. “Albert Lea needed something like this.”

Though the restaurant is clearly known for its coffee, Orchard described it as having a family-oriented atmosphere with numerous other things to choose from on the menu, including smoothies, hot chocolate, irish cream sodas, oatmeal, bakery items and sandwiches.

He said the company believes in fresh-roasted coffee, comparing its freshness to as important as having fresh bread. He said the coffee loses its health benefits the longer it sits, as well as flavor and aroma.

Staff roast coffee in-house and offer signature blends as well as custom blends. The company believes in having high-quality ingredients, including syrups from France and Ghirardelli chocolate.

The company also offers a coffee bean service, as well as catering.

One facet that is unique to Cabin Coffee Co. is that it offers white coffee that has a sweet, nutty flavor. This can be made hot or iced.

The company also offers its own espresso bean called Lucky 13 that can be purchased.

It offers a club card that tracks customer history and allows customers to earn points for free product. In addition, the company seeks to educate customers about coffee, the difference between roasts and the benefits.

Orchard said the company has already had a good welcome in Albert Lea as staff have shared some of the products around the community in preparation for the opening.

There will be eight to 10 full-time employees at the Albert Lea location.