CrossFit gym to open in March on Y.H. Hanson Ave. in A.L. 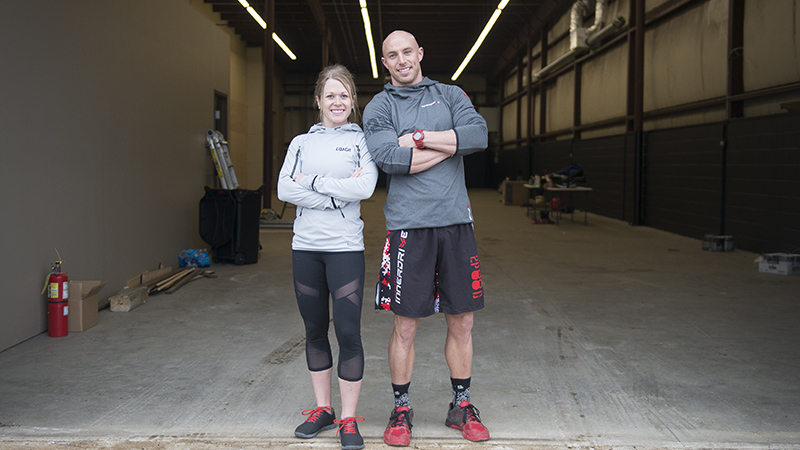 The sport of CrossFit was founded by Greg Glassman and Lauren Jenai in 1996 and became a trademark company in 2000.

But like all things, it took time for people to get behind it.

Thanks to a rise in popularity of CrossFit, the workout sport has taken off with the CrossFit Games, which started in 2007.

In March, Albert Lea will have its very own CrossFit gym.

Bryce Becker and Brittni Lair are work partners and coaches and help teach at CrossFit InnerDrive in Austin.

Thanks to the growth of CrossFit from members in the surrounding communities in southern Minnesota, Becker and Lair needed to find a bigger space, so they settled on a warehouse that is home to over 5,000 square feet and will allow them to max out their class-size capacity.

“We are extremely excited about the move,” said Becker, who is a physical education teacher at Southgate Elementary School in Austin.

Becker is a 2003 graduate of Austin High School and was a former athlete in college, starring in football and track and field at Northwestern College in Orange City, Iowa. He graduated from college in 2007.

After graduating, Becker said he had a fitness void that he needed to fill.

“I have always loved being active, and after school, I felt a void in my life that needed to be filled,” Becker said.

He turned to CrossFit, which is a workout regimen that consists of high-intensity interval training, Olympic weightlifting, plyometrics, powerlifting, gymnastics, girevoy sport, calisthenics, strongman and other exercises.

Three years ago, he decided to start his company, CrossFit InnerDrive, and ran it out of a garage.

“I tested it out on some friends at first, Becker said. “Then it started to take off, and pretty soon we got evicted from the garage because our members took up all the parking on the street. Needless to say, we needed to find a bigger space.”

Becker found a bigger space at 2215 Fourth St. NW, in Austin, but now it has grown so much they needed to move to the bigger space in Albert Lea, which is just fine with their customers.

“At first, Brittni and I were a little more hesitant than our customers, just because we didn’t know how they would react,” Becker said. “But they are excited, and now we are excited as we get ready for this big move.”

Becker said another reason for the move was the ability and possibility of serving more customers or members during a single training session.

“In Austin, we were capped at around 15 to 16 people per session because of the space we had available,” Becker said. “Plus, we would go six people deep on the waiting list. This bigger space will allow us to have bigger groups.”

Becker’s brainchild, InnerDrive, has also turned into a dream goal come early for Lair, who said she has always wanted to own a gym in her lifetime.

“I always thought I would own a gym once I retired from work,” said Lair, who is a 2008 graduate of Albert Lea High School. “I have always loved fitness, and I taught classes at the YMCA. I love helping people reach their goals.”

Lair played soccer and competed in track and field in high school before going on to play soccer at Wartburg College. She graduated from Wartburg College and then attended school to become a physician assistant at Union College in Lincoln, Nebraska. She graduated in May 2015, and has worked for Mayo Clinic Health System in Albert Lea as a physician assistant since July 2015.

She met Becker through CrossFit.

“I have been doing CrossFit on and off for about five years, but became serious about it a year and a half ago,” Lair said. “I dropped into (Bryce’s) gym about three years ago, but I was so busy with grad school that I wasn’t able to devote a lot of time to it. Once I moved back to Albert Lea, I became a regular, and he asked me to compete in a few competitions. That’s kind of how it all started.”

Becker said he noticed her competitiveness was a level above most of his members and saw how dedicated she was to the sport.

“I reached out to her a few times, and then she finally moved back to Albert Lea,” Becker said. “She became a regular and was really good at CrossFit because of her competitiveness. We talked about making her a coach, and with her enthusiasm and wanting to own a gym down the road, we knew it was going to be a good fit.”

The two partnered together, and Lair used her connections in Albert Lea to help secure the new InnerDrive CrossFit at 2610 Y.H. Hanson Ave. with some help of the Small Business Development Center in Albert Lea.

The two partners couldn’t be more excited for the new opening, and they plan on using social media to increase their outreach to potential members, as well as keeping current members updated on what is going on at the gym.

While CrossFit might seem like an intimidating workout — and sometimes it is — Becker and Lair both agree that the group model helps each other get through the workouts.

“What you see on television is the top of the top,” Becker said. “Those are the elite athletes in the sport. The average person can do CrossFit because the workouts are normally modified due to ability. Even if a workout is challenging, that’s how a person sees gains in their physical ability and fitness. We want to make the workout obtainable, but also challenging at the same time. It’s important to push limits.”

Becker and Lair said while a lot of members are former athletes, anyone who wants to do CrossFit can do CrossFit.

“CrossFit is intimidating, at first,” Lair said. “But come in and check it out. Let me show that you can do it. Everyone starts at the ground level. We are here to build people up.”

CrossFit InnerDrive has its own Facebook page and website, and Lair and Becker plan on updating it a couple of times a week until the new place opens in March.

“We are excited for this,” Becker said. “We have a chance to bring something to Albert Lea that it currently doesn’t have. CrossFit has always been kind of a hobby, but now we are looking to make it a business. There is a lot of potential possibilities with this new location, and that’s exciting.”