He was born Sept. 20, 1936, in Big Stone City, South Dakota, to David and Louise (Thiele) Lantis.In 1954, he graduated from Big Stone City High School and then went on to work for the Ortonville Paper in the printing area. Later he worked for Arrow Printing in Albert Lea. 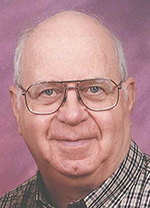 On July 25, 1964, he married Helen Hartgers. After moving to Red Wing in 1969, he began working for Jostens Printing until his retirement. He also enjoyed working part time with his friends at Koplin’s Grocery, served as an auxiliary police officer for the city of Red Wing and for many years played Santa. He was a member of United Lutheran Church and Phantom Car Club. He enjoyed collecting old cars, camping, hunting, fishing and spending time with family, particularly his grandchildren.

Funeral services will be at 10 a.m. Saturday at United Lutheran Church in Red Wing. The Rev. Karl Rydholm will officiate. Visitation will be from 4 to 7 p.m. Friday at Mahn Family Funeral Home’s Bodelson-Mahn chapel and one hour prior to the service. Memorials are preferred to the Alzheimer’s Association. Online condolences may be left for the family at www.mahnfamilyfuneralhome.com.