Funeral services for Donald Jacobs will be at 10 a.m. Saturday at West Freeborn Lutheran Church. The Revs. Mark Hillmer and Kent Otterman will officiate. Interment will be at West Freeborn Lutheran Cemetery. Visitation will be from 5 to 7 p.m. Friday at Bayview/Freeborn Funeral Home and one hour prior to the service at the church. Online condolences are welcome at www.bayviewfuneral.com.

Donald died peacefully Friday, Jan. 6, 2017, at Good Samaritan Society of Albert Lea with family at his side. 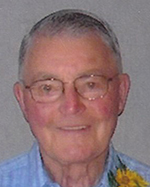 After graduating from Alden High School, he began carpentry work with his father, Ed, and brother-in-law, Walt Newman. On Sept. 7, 1950, he married Darlene Olsen at Redeemer Lutheran Church in Alden. Don farmed near Manchester and was a very dedicated and hardworking dairy and crop farmer.

After retiring from farming he spent the next 15 years working as a courier for the Albert Lea Medical Center. He enjoyed visiting with staff and patients. Donald was a member of the West Freeborn Lutheran Church and the Eagles Club. He was board supervisor and board member of Manchester Township for 18 years.

Donald will always be remembered for his fun, loving and kind personality. He always took time for others and put a smile on those around him. He loved spending time with his family, farming, dancing and visiting with people. Donald always looked forward to the annual family pheasant hunt in South Dakota. He loved life and lived it to the fullest.

Memorials are preferred to West Freeborn Church, the Parkinson’s Association or Youth For Christ.

Don’s family would like to thank the staff at Good Samaritan Society — not only for the care he received the last two and a half years, but also for the friendship and love they gave to their dad. The staff and residents became a very important part of his life. God bless you.