MEXICO CITY  — Joaquin “El Chapo” Guzman’s abrupt exit to face charges in the U.S. marks the end of an era in which he was Mexico’s most notorious drug cartel boss and, for some, the stuff of folk legend.

It’s also seen by many in Mexico as a delicately timed maneuver aimed at limiting political fallout for President Enrique Pena Nieto, already deeply unpopular in part for his perceived mishandling of Donald Trump’s tough rhetoric on Mexico. 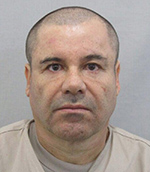 “It was resolved today, and we under terms of the international treaty had to make the handover immediately,” he said.

But observers still considered the timing to have been carefully planned.

“It could be a coincidence, but I think that’s unlikely,” Mexican security analyst Alejandro Hope said, noting it came the last full day of Barack Obama’s presidency and hours before Trump’s inauguration.

“They could not send him after Trump was inaugurated because the interpretation would have been that of a tribute,” Hope said. “But maybe they wanted to do it close enough so that both administrations — the outgoing and the incoming — could really make some political hay out of this.”

Others saw it as a reward to Obama and a shot across the bow of Trump, who has called immigrants coming illegally from Mexico criminals and “rapists” and vowed to build a border wall and make Mexico pay for it.

“The Mexican government decided to move up the time frame because they didn’t want Trump to be in the presidency when they sent him over,” said Michael Vigil, the former head of international operations for the U.S. Drug Enforcement Administration. “They wanted Obama to take credit. They wanted to send a message to Trump that they won’t be bullied.”

One Guzman lawyer, Jose Refugio Rodriguez, said the extradition violated due process. He told the Radio Formula station that he planned to file a complaint with the Inter-American Human Rights Commission.

Hope said the timing also sends a message that Mexico is serious about anti-drug cooperation regardless of who occupies the White House.

Sen. Miguel Barbosa of the leftist opposition Democratic Revolution Party seized on the extradition to take a swipe at Pena Nieto. He said it was apparently the only choice after Guzman twice pulled off embarrassing escapes from maximum-security lockups.