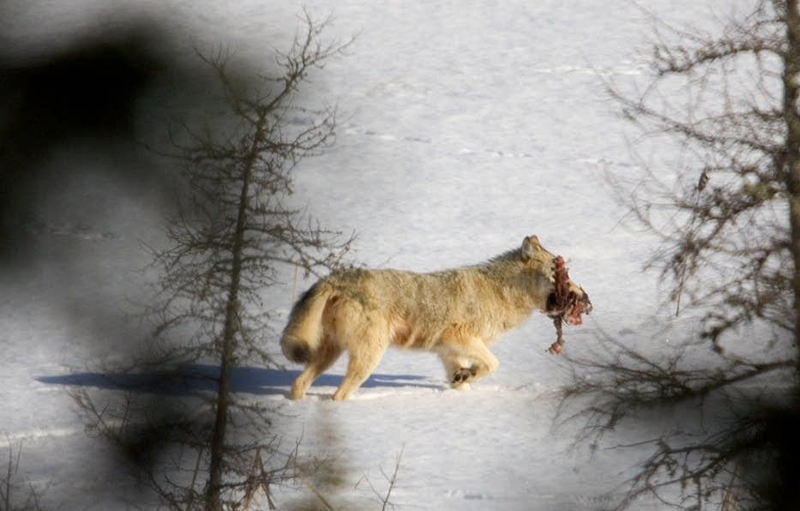 Sen. Amy Klobuchar has co-sponsored legislation to remove wolves in Minnesota from the endangered species list. Wolves have been "delisted" three times in the past decade, only to be "relisted" after court challenges. - Steve Foss/MPR file

Loved and loathed, reviled and revered, no species that stalks Minnesota’s north woods has ever been more divisive than the gray wolf.

And the debate over whether they should be protected by the Endangered Species Act — or removed from the list — has brought out passions on both sides for years.

“Damn right it’s an emotional issue,” shouted Melissa Smith, with a group called Friends of the Wisconsin Wolf, at a rally in Duluth in 2014. “You’re killing things for fun. And if that isn’t emotional, I don’t know what is.”

Smith was angry about wolf hunts that began in Minnesota and Wisconsin in 2012, after the last time wolves in the Great Lakes states were removed from the endangered species list, in December 2011.

But many scientists and wildlife managers, and even some environmental groups, said it’s time to take that emotion out of wolf management decisions. They argue wolves in Minnesota, Wisconsin and Michigan are not only recovered, but thriving.

“It is a remarkable conservation success story,” said Dan Stark, large carnivore specialist with the Minnesota Department of Natural Resources.

Once exterminated from nearly the entire lower 48 states — with only a few hundred wolves hanging on in the remote forests of northern Minnesota — the population in the state has now exceeded 2,000 for at least 20 years, making it one of the densest populations of wolves in North America.

“The wolf population is secure,” Stark said. “They’re not a fragile population in the state that’s at risk of becoming endangered or going extinct. They’re going to be here for a long time.”

Stark and others believe the wolf’s recovery in the upper Midwest is an endangered species success on par with the recovery of the bald eagle, or the American alligator. But they said that story has been overshadowed by the back and forth over its legal status.

Nearly 10 years ago, in March 2007, the U.S. Fish and Wildlife Service issued its first rule to delist the gray wolf in the western Great Lakes states. But a year and a half later, a federal judge placed the wolf back under endangered species protection.

In 2009, they were delisted again. But another court challenge forced the agency to reverse itself. Then in 2011, they were removed from the endangered species a third time, before a judge again returned the wolf to federal protection in December 2014.

Collette Adkins, an attorney and biologist at the Center for Biological Diversity based in Minneapolis, was involved in several of those court battles to return wolves to the Endangered Species Act.

“Wolves have made great progress toward recovery,” Adkins said. “That’s because the Endangered Species Act works. But when those federal protections were removed, the states showed they were dead set on killing their wolves. And that they can’t be trusted with wolf management.”

In 2011, the last time wolves were delisted, Minnesota moved quickly to implement a hunting season the following year, even though the state’s management plan called for a five-year study before authorizing a hunt.

If wolves are delisted again, Stark said, Minnesota would likely reauthorize a hunt.

“We would most likely pick up where we left off when wolves went back on the list,” he said.

That’s something the state’s seven Ojibwe bands would likely oppose. The bands all forbid hunting on their reservations. Many Ojibwe view their relationship with wolves as a “brotherhood,” explained Thomas Howes, the Fond du Lac Band of Lake Superior Chippewa’s natural resources manager.

“It’s not so much that we don’t want wolves to be taken off the list,” he said. “It’s great that things are recovered. That’s a good sign. But to immediately jump to hunting we felt was an overreach by state agencies.”

The last survey of wolves in Minnesota, conducted last winter, estimated 2,300 wolves in the state. There are an additional 1,500 wolves in Wisconsin and Michigan.

Those estimates are nearly triple the original recovery goals, which called for wolves to be delisted when their population reached 1,250 for five years in Minnesota, and 100 wolves combined between Wisconsin and Michigan.

Two years ago, a group of 25 scientists wrote a letter to the U.S. Fish and Wildlife Service, urging the agency to remove wolves in the western Great Lakes states from endangered species protection.

“If they’re kept on the list, then the question is, why do we have the list?” said Dave Mech, one of the signatories of the letter. Mech is a biologist with the U.S. Geological Survey and a University of Minnesota professor who’s studied wolves for nearly 60 years.

“It’s to recover the animal to the point they shouldn’t be on the list, that’s the whole point of the list,” he said.

Mech and other scientists argue that by not removing wolves from the endangered species list after recovery goals have been reached, “it creates disincentives for the states to continue to be active participants in recovery efforts,” and also creates public resentment toward wolves, and the law itself.

Critics of the endangered species act complain that of the more than 1,600 animals and plants protected by the law in the U.S., fewer than 70 species have ever been removed from the list.

But Maureen Hackett, founder of the Minnesota-based wolf advocacy organization Howling for Wolves, said scientists disregard the hatred she believes many people still harbor for wolves.

“The whole reason the wolf was wiped out was because of human killing,” she said. “And we have not worked on those human attitudes.”

The legislation sponsored by Klobuchar and others could put an end to the long legal back and forth over wolf management. It contains a provision that would prohibit legal challenges to the wolf’s removal from the endangered species list.

There is a concern that could set a precedent for Congress to remove other species from the list before there’s scientific consensus they’re recovered, said Jason Dinsmore, a regional representative with the National Wildlife Federation based in Rochester.

But in this case, he said, the legislation is warranted. “It’s grounded in science. Unfortunately, because of legal technicalities, it’s been held up. I think at this point these bills are a necessary evil.”