Glenville man prepares to retire after 50 years at co-op 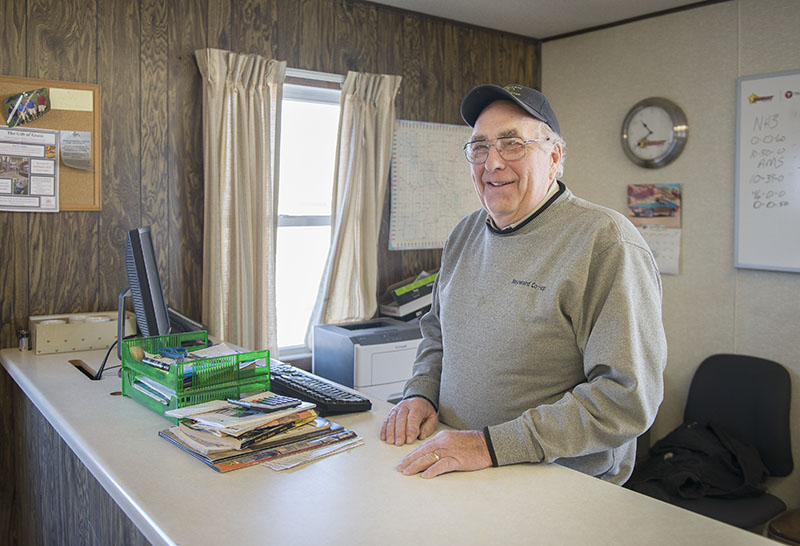 Gary Gulbrandson has worked at Hayward Co-Op for 50 years, and is retiring this month. - Colleen Harrison/Albert Lea Tribune

HAYWARD — The average worker today stays at his or her job for 4.4 years, according to the most recent available data from the Bureau of Labor Statistics.

Gary Gulbrandson is not your average worker.

Gulbrandson, 68, is getting ready to retire from Hayward Co-op — where he has worked for 50 years.

A native of Hayward, Gulbrandson graduated from Albert Lea High School in 1966 and now lives in Glenville with his wife, Shelley.

“I never figured on staying here this long, but one thing led to another and here I am,” he said.

The only other jobs he worked before starting at the co-op were working for one farmer and building a hog house for another farmer.

Having grown up on a farm, Gulbrandson said he knew he’d always have a job related to farming.

“I always wanted to farm, and this is the next best thing to farming,” he said.

His job as agronomy manager at the co-op has entailed everything from helping farmers plan their crops, helping spread fertilizer, taking customer orders and everything in between, Gulbrandson said.

The part of the job he has liked the most? The people.

“That’s one thing I’m going to miss the most, is the people,” Gulbrandson said.

While the decision wasn’t an easy one to make, Gulbrandson said he decided it was time to retire because he wanted to be able to do more volunteer work, travel more and be free of having a set schedule. He also hopes to spend more time with his family, especially his children — some of whom live out of state — and his 11 grandchildren.

A member of First Lutheran Church in Glenville, Gulbrandson said he has been the president, a trustee and the vice president, respectively, for the church; and is currently a Glenville City Council member.

Over his 50 years in the agriculture industry, Gulbrandson said farming has changed drastically. The co-op itself has expanded, and machinery used in farming has gotten much bigger and has opened up certain capabilities that weren’t there before. While Gulbrandson said farmers could originally fertilize about 300 acres in a day when he first started working, they can now go through that same number of acres in a single hour.

Gulbrandson said he has traveled all over the country quite a bit through working for the co-op and has made many friends he is still in touch with today.

He doesn’t plan to spend his retirement idly, either. Gulbrandson said he has always been one to keep busy and has always been an early riser — meaning he’ll be able to stay longer during his morning coffee visits to Glenville Shortstop. He will enjoy not having to fill his weekends with chores he couldn’t get to during the work week, he said.

There will be an open house in Gulbrandson’s honor from 9 a.m. to 3 p.m. Jan. 12 at Hayward Community Hall to celebrate his retirement from the co-op.

Livelihood: about to retire from a 50-year career with Hayward Co-Op