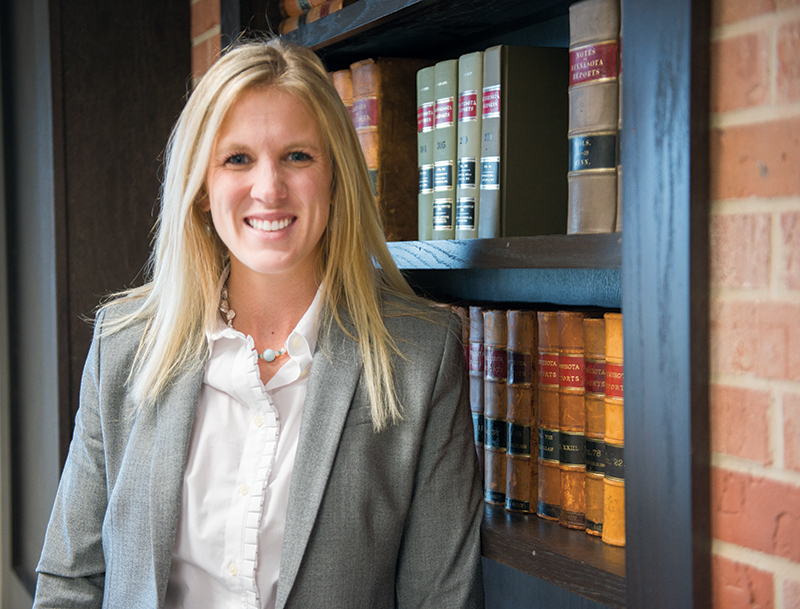 Abby Leach works as an attorney at Savelkoul Law Office. She grew up in Albert Lea and is the daughter of Todd and Nancy Leach.

When asked why I love Albert Lea,  the only answer I could come up with was how could I not love it here? Albert Lea is home. My parents Todd and Nancy Leach were both born and raised in Albert Lea. Growing up in Albert Lea, I was surrounded by so many different opportunities at all ages. As a child, I spent my summer days at the Albert Lea Parks and Rec buildings, boating on Fountain Lake and walking and rollerblading around the lake. My parents never had to question where we were going, when we would be home and who we were going to be with — they always knew we were in good hands. As a child, I didn’t realize how amazing the people in this community are.

After graduating from Albert Lea High School in 2008, I attended St. Mary’s University in Winona. In 2011, I received a bachelor’s degree in biology. After graduation, I worked for Pioneer Hi-Bred in Johnston, Iowa. While at Pioneer, I was working in the protein research lab where I tested the reaction between insects that kill or damage crops and proteins that could potentially kill them.

Living in Iowa for a year, however, I realized I missed Minnesota. I moved back to Albert Lea to study for the LSAT and to apply to law school. During that time, I was a substitute teacher for District 241. I was welcomed with open arms into the district and met many new people in the community while working with the school district. After the support I received while being a substitute teacher and the support I received attending the University of South Dakota School of Law, I realized Albert Lea is where I wanted to start my career.

While at University of South Dakota School of Law, I was the graduate assistant to the law school dean of students, intern for a venture capitalist company, the co-chairwoman for the American Bar Association Intellectual Property Law Student Reporters Division, participated in both trial team and mergers and acquisition competitions, and was the president of Women in Law and the Domestic Violence Association.

Throughout the years I have worked at many locally owned businesses, including Green Lea Golf Course, 112 on Broadway, the Albert Lea Family Y and — of course — for my parent’s business, Performance Landscape. While studying for the bar exam, I was worried about coming back home and not having access to a library anytime I needed. I signed up with The Outlet (at The Marketing Plant) for their 24-hour access card, which not only allowed me to study at The Marketing Plant any time of day, but The Marketing Plant also provided so many other amenities (who doesn’t like fresh popcorn anytime they want!). Everybody up at The Marketing Plant supported me by not only supporting me during the extensive studying for the bar exam, but kept in contact with me while I was waiting for my results. The support from not only them, but everyone else in the community has made the move back to Albert Lea a success.

I am currently working as an attorney for Savelkoul Law Office. Our practice areas are estate planning, civil litigation, personal injury, agriculture law, business law and real estate. I am excited to learn many different skills along the way and find my niche. I love the idea of working with and serving the community that has supported me for so many years and to continue to grow!