Hanlontown marsh and creek not impacted by diesel spill 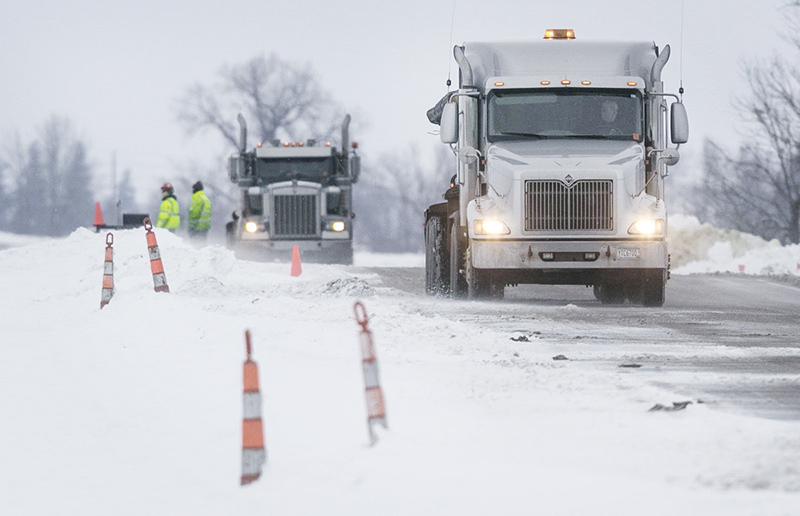 Trucks haul contaminated soil and snow away from the site of a diesel fuel spill Thursday after a pipeline broke at about 8 a.m. Wednesday near Hanlontown, Iowa. Chris Zoeller/Mason City Globe Gazette

HANLONTOWN, Iowa — A wildlife area and creek near a pipeline break that spilled 138,600 gallons of diesel near Hanlontown show no signs of contamination, officials said.

The break was discovered at about 8 a.m. Wednesday in a 12-inch pipeline near 390th Street and Wheelerwood Avenue. That’s about three miles north and one mile east of Hanlontown, and about a mile west of Interstate 35.

The pipeline is owned by the Tulsa, Oklahoma-based Magellan Midstream Partners.

Although the leak was initially reported Wednesday morning as approximately 63,000 gallons, the company revised the estimate later in the day to 3,300 barrels, or 138,600 gallons.

Built in the 1950s, the pipeline that broke was on a segment that carries product from Rosemount, Minnesota, to the Mason City area. Magellan has a terminal in Clear Lake. 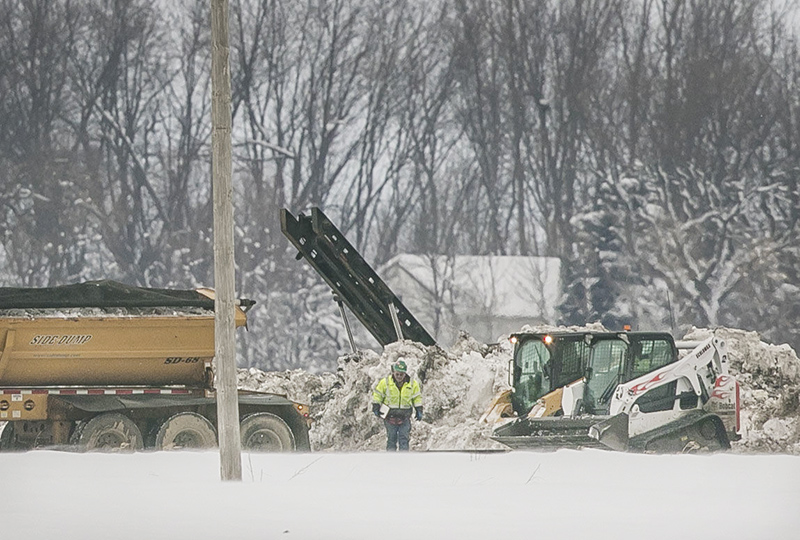 The incident is the sixth largest refined petroleum spill reported by companies to the U.S. Department of Transportation this decade and the largest diesel spill since January 2010, according to the department’s Pipeline  and Hazardous Materials Safety Administration records.

During that time 807 spills have been reported, causing $342 million in estimated property damage releasing more than 3 million gallons of gas, diesel fuel and other petroleum products.

Magellan Spokesman Bruce Heine said the company was still investigating the break’s cause on Thursday morning. More than 70 Magellan representatives, local responders, regulators and contractors were on site Thursday morning.

Contractors were working Thursday to suck up the diesel, which has pooled over an acre of farm field and the edge of a neighboring acreage, and will later dig and remove contaminated soil, said David Miller, an environmental specialist for the Iowa Department of Natural Resources.

Contaminated snow and diesel are being hauled to a Minneapolis facility. Contaminated soil will be excavated and taken to a landfill near Clear Lake, Jeff Vansteenburg, spokesman for the Iowa Department of Natural Resources, told The Associated Press.

“Magellan reports they hope to recover all of the pooled product within the next one to two days,” said Miller, based in Mason City. “And then, at that time, they will begin to excavate the contaminated soil.”

He expected the excavation to take a few weeks.

The Iowa DNR does not believe the spill impacted Willow Creek, which runs just east of Wheelerwood, or the nearby Hanlontown Slough Waterfowl Production Area, Miller said.

The Hanlontown Slough is a 939-acre state-managed marshland on the southwest side of 390th and Wheelerwood Road. The break is one-third of a mile north of the intersection.

“The most obvious impact would be a visible sheen, which has never been noted,” Miller said.

He said water samples were taken from Willow Creek upstream and downstream of the leak.

The Iowa DNR also reviewed the local drain system and did not find any drainage tiles leading to the creek or slough, and didn’t find any evidence of tiles at the site that would drain into either waterway, Miller said.

Magellan has suspended operations on the segment of pipeline affected by the break, Heine said.

“Although we expect to begin pipeline repairs later today, we do not have an estimate when pipeline operations will resume on the affected segment of our system,” he said via email. “We do not expect this incident to disrupt the supply of gasoline, diesel and other refined petroleum products in the region.”

The pipeline was built in the early 1950s, but Heine said the age of a pipeline is not a safety factor when it’s adequately inspected and maintained.

Federal government data shows Iowa had 13 serious pipeline incidents with one fatality and 16 injuries between 1996 and 2015. Serious incidents include a fatality or injury requiring in-patient hospitalization.