Funeral services for Harold R. Knutson of Glenville will be at 4 p.m. Sunday at Bonnerup Funeral Service in Albert Lea. The Rev. Kent Otterman will officiate. Friends may visit from 2 p.m. until the time of the service at the funeral home. Military honors will be accorded by the Emmons veterans organizations. Private interment will be in Silver Lake Cemetery. 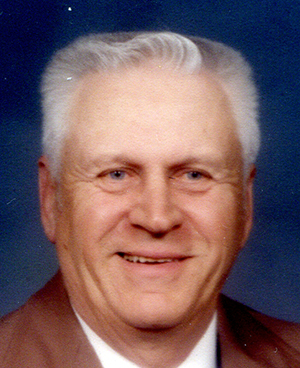 Harold was born on a farm near Emmons on Jan. 11, 1926, the son of Irnel and Tilda (Loftus) Knutson. He left school in his junior year to serve our country in the United States Navy during World War II. He served in the Mediterranean, Atlantic and Pacific on board a destroyer with the 7th Fleet. He received his honorable discharge in May 1946. He was so proud to have served his great country.

He married Elaine Egland on May 1, 1949, at Silver Lake Lutheran Church. Upon his return from the service Harold worked for Helgeson Oil Co. in Emmons as a tank truck driver. He was hired by Standard Oil Co. as a driver in October 1951. He became agent of the Standard Oil-Glenville Bulk Plant in 1953 and later acquired the Gordonsville, Hayward and Myrtle areas before retiring in 1981.

Harold and Elaine lived more than 24 years in Glenville. During this time Harold served 14 years on the village council and two years as chaplain of the American Legion. He served on the Glenville Fire Department for more than 30 years, serving as chief for many of them. He was a member of First Lutheran Church of Glenville, where he served three years as president and had also served as president of Silver Lake Lutheran Church while a member there.

Many memories were made riding motorcycle, spending time at Leech Lake and Clear Lake and taking rides in any trucks or vehicles anytime the family stopped by to pick him up.